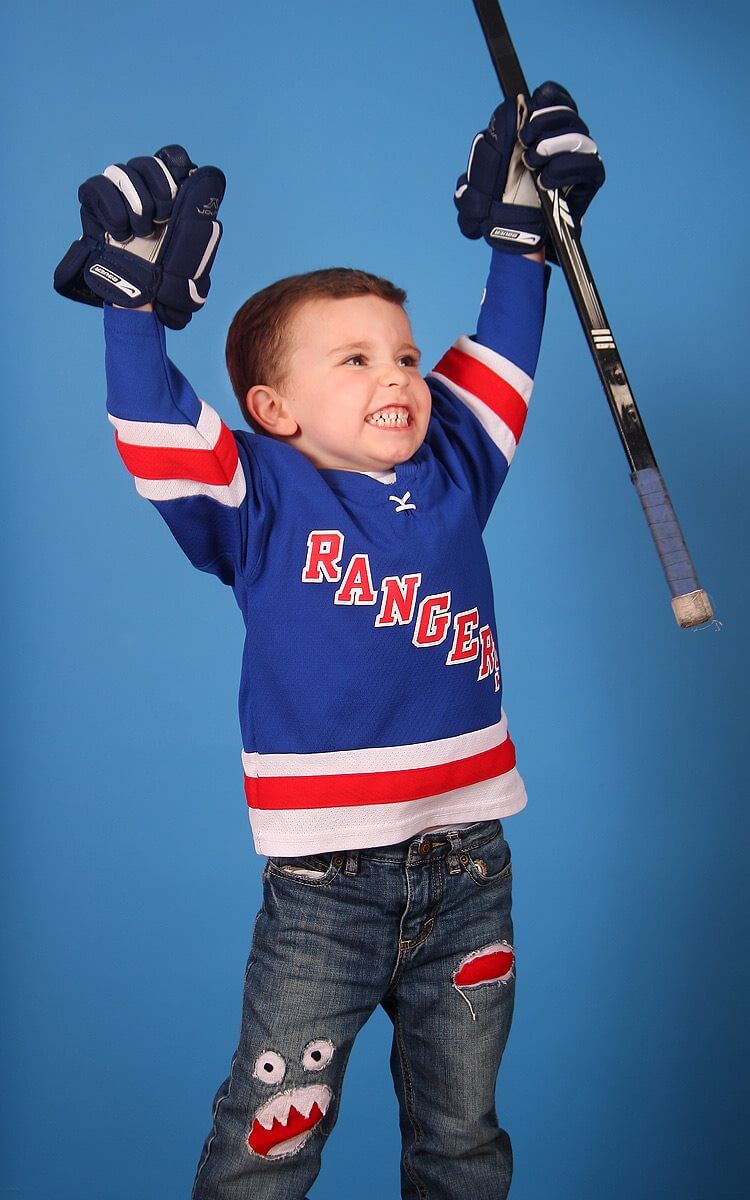 Never one to throw on the dad goggles myself, I like to think I've always kept it real.

I mean, there was a brief moment in time where I thought my oldest was NHL bound...but those aspirations came crashing down when he was just 6 years old.

There will always be better players -- WAY BETTER PLAYERS -- than your kids.

And those kids aren't going to make it to the NHL either.

So, first and foremost, for your sake and your kid's sake, hope all you want for an NHL future but stop expecting it.

Recognize your kids’ strengths and weaknesses...and you'll quickly gain a pretty good grasp of how far they can take this hockey thing.

If your kid is slow, like one of mine, you know it.

If your kid can't stay on his feet, you know it.

If your kid is lazy, you know it.

If your kid takes penalties all the time, you know it.

It's all right there in front you. Take the goggles off.

Hey man, those are your genes out there on the ice. Apple never falls far from the tree -- and a little self-assessment and reflection can cure most frustration.

My expectations now, every hockey season, and for nearly every time they're on the ice is that they get better.

I know, it sounds soft but really, selfishly, if my kid is getting better, I'm satisfied.

It really is as simple as that.

Having gone through the process twice now -- and in the midst of it for a third time -- it really is like history repeating.

Every team at a specific age level is the same -- I swear, I'm on repeat.

Slightly different pace, sure, but the trendline is still the same.

The fastest (or biggest) kids dominate as 5 and 6 year olds.

The kids that can lift the puck as 7 and 8 year olds score the most goals.

At 9 and 10, the danglers that also display patience with the puck really stand out.

After that, though, for kids that are 5-6 seasons in, EVERYONE can skate, shoot hard with accuracy, and dangle.

At this point, intelligence takes over.

The kids that are still puck chasers, regardless of their physical skill set, get left, well, playing monkey in the middle.

It really starts to show at the PeeWee level.

Point is, it's a well-worn path -- EVERY player takes the same route.

You can think your kid is special, or that you can fast track things, or that other kids are holding your kid back, but the reality is...well, like I said, every player is on the same path up until they're teenagers...and then the genuinely talented players start to showcase themselves.

Last year with Emmet, my youngest, I registered him for a Learn-to-Play program with one of the best youth programs in our state. Like, on myhockeyrankings.com -- if you're into that sort of thing -- they had very highly ranked teams and were quite boastful about it.

So, we go there and they get all the kids little tiny uniforms -- we're talking about 3 and 4 year olds here -- and the kids all just go out on the ice and wander aimlessly whacking at pucks...for an hour.

Instruction or structure, even, was minimal.

I mean, they had coaches out there supervising and giving words of encouragement but that was it.

A sizable number of parents watching from behind the glass were openly annoyed...clearly expecting this "elite" program to have the kids all lining up on the goal line for organized drills or something.

Those parents don't get it.

They're the ones with unrealistic expectations.

Thirty upside down turtles doing snow angels aren't going to master skating backwards in an hour. They're not.

But the fact that 30 kids, in that age bracket, stayed out on the ice for an entire hour is nothing short of a miracle.

We hockey parents have all had a kid meltdown after less than 5 minutes on the ice... Admit it, you've taken their equipment off while the rest of the kids are still on the ice at least once.

It happens...and it's a result of our unrealistic expectations -- hockey SUCKS when it's not fun.

So, for 10 weeks, Emmet was basically participating in an "open hockey" session for kids under 5 years old...and loving it.

I was too...because I understood that you can't just start doing drills.

You have to be mobile first.

Emmet was getting more and more comfortable on the ice with each passing hour of ice time...where no one was telling him what to do. It was perfect for that age...but so few other parents recognized that.

I mean, you could see progression happening right before your eyes week-over-week.

It was amazing. Exciting, even.

And this is the time period where the NHL expectations take root...

Everything seems to be up-and-up...and then they plateau.

Or seemingly start to get worse.

Been there, done that.

Some parents get all agitated about it.

Some think other players are bringing their kid down -- as if talent leaks out or something.

Suddenly, the thought is, they're too good to be on this team.

Some even blame the coaches for stifling their kids formerly rapid progression.

Yep, totally the coach's fault. For sure.

I'm already loathing the future parent drama floating around me when my youngest hits this stage.

But this is where that path I mentioned earlier comes into play.

Every player follows the *same* path. Slightly different pace, sure, but the trendline is still the same.

The speed with which kids at the mite/atom level develop skills isn't sustainable.

All three kids went from the ABC's, to sight words, to those books with maybe 10 sentences total pretty rapidly...and then they stalled.

In my life, I'm not sure I've become a better reader than I was at 7 years old.

Sure, my vocabulary has grown and become more, uhh, colorful but, really, I haven't gotten noticeably better at reading over the past 4 decades.

So, when you think your kid has plateaued or is getting worse, they're not.

At this young age, it's far more likely that other kids on the team are just still progressing at that "unsustainable" pace.

There was a time when we went an entire season with my oldest where I'd convinced myself that he was stuck on autopilot. It felt like he was just aimlessly skating around in every single game. Lost.

Other kids were scoring at will and he was, well, he only scored one goal all season long in league play.

In my un-experienced head, he was done. Everyone had just blown by him.

And, while this was happening, at the other end of the depth chart, we had parents thinking our team was below their kids' level -- and being pretty obnoxious about it -- and they were looking to move on.

Other parents were frustrated cause kids like mine were even on the team.

Can you say drama?

A few years past that, since we're all still in the same social circles with just a couple exceptions, we all agree that we were ALL wrong.

That kind of wisdom only comes with experience.

Experience that we now have.

No one tells you that, going in.

I mean, I get it, no one likes someone who rains on your parade but I'll say it anyway -- your kid is going to plateau in year two or three of hockey.

And it's not something to get worked up about.

It's staggering, really, how much differently parents navigate it all with their second or third (or fourth!) child.

Now, with a PeeWee, I realize that the one season that I thought my son regressed to the point that he didn't belong at this level of hockey wasn't a waste at all.

I just didn't see the development happening before my eyes like I'd foolishly grown accustomed to.

The kid can skate.

Every single time he's on the ice.

The transitions I see him make with ease are really something -- I'll admit I'm jealous -- and those were all skills that developed while I was "expecting" something totally different out of him.

He's still not going to the NHL ... but I knew that long ago.

So, by the time the kids are 10 or, really, by their second or third year of hockey -- they all appear to be plateauing. Every single one of them.

If this is your first (or only) child playing hockey and you can relate to any of this, dollars-to-donuts, you're going about it all wrong.

To that end, if it wasn't already clear, I'd always advise observing how parents with older kids handle themselves at team events, practices, and games.

Value the wisdom that they can share with you.

They know what they're doing cause they've already done it. Some more than once.

I can only think of one family we've crossed paths with that also has multiple kids playing hockey that still get worked up over, or wrapped up in, the least important things and constantly have drama swirling around them.

The rest of us, though, are pretty even keeled.

Learning more and more and just taking it all in stride with each additional run, err, kid.

It's rare to encounter a seasoned hockey parent up in arms about ice time.

Or which line their kid is on.

Or how bad the officiating is.

Or how terrible the coaching is.

Or even the results of a Brick series tryout -- if they're foolish enough, like me, to fall for that a second time.

It's not that we don't care.

And it's not that we lack the competitive spirit either.

It's that we already know that a skipped or short shift for our kid, in any given game, doesn't amount to anything in the grand scheme.

Is my kid getting better?

Are they having fun?

If that's a double yes...that's enough.