Last summer, we did hill training with some relatively successful results.

It gave my middle son the confidence in himself that, even though he's younger, he could outrun and outwork an older player -- his older brother -- and my oldest son learned that, well, when you give up, you lose by more and more. Every time.

Don't give up if someone gets ahead of you.

Definitely beneficial. For both of them.

This offseason, I wanted more of a physical end result. I mean, that was my expectation from the hills last year but, looking back, it ended up being more of a mental win with the lessons learned rather than a physical one.

By the start of the season, they were both better than they'd been at the end of the previous season so, yeah, our COVID-19 summer routine was still a success, eitherway.

So, crappy segway here but when I worked in pro hockey, I'd see guys before the game doing these frog-like broad jumps below the stands. I'd also see guys doing lunges. Some would do short sprints. One dude would run up and down the stairs in the arena before the public came in. A couple guys would kill time taping their sticks. And there was always one guy running ladders -- my kids thought they were doing hopscotch.

Most of the players, though, would just be in a circle juggling a soccer ball.

I used to think it was all just some sort of warming up exercise of personal preference -- and I guess it was -- but now I'm better understanding all of the things I witnessed but never really thought much of.

Thinking back on who I saw doing what -- I now realize they were all focusing on one of their own personal weaknesses.

So, this offseason, we're doing the same.

The weakest part of my oldest son's game is his speed. Like, it's just not there, and it was at a public skating session we attended, where all three of my kids wore short soccer shorts, that I saw the issue with blinding clarity.

Like, my middle son has a hockey butt. His legs are tapered down to the ankle. My youngest shows signs of that "build" as well.

He has bird legs.

His thighs look to be around the same circumference as his calves.

In reality, they're not...but to the naked eye, they appear that way.

For a hockey player, that's an issue.

He's been privately coached for power skating since the season ended and, yes, it's helped him on the ice, but it's still apparent -- it's ALWAYS been apparent -- that he just doesn't push hard enough.

There isn't any muscle there.

Now, this isn't news to us. I've been aware that his stride is good, he just lacks power.

Like, he skates like a hockey player...but he moves like molasses in February when skating alongside players that have more power and that gain more speed with each additional stride.

A former coach suggested he do squats and we tried that for around a year. He'd hold a 15-lb kettle weight and do squats until he couldn't anymore.

The results were...minimal. Actually, I shouldn't say that. I think that built up his core more than his lower body -- good, sure, but not the result we were really going for.

Then we tried one legged squats and those were, well, harder but still pretty ineffective.

Looking online for alternative solutions, I've seen suggestions that box jumps are the way to go.

I know I've mentioned in the past that he as around a 4-inch vertical -- basketball will never be his game -- and a nasty, nasty, nasty scar on his shins from a missed box jump a couple offseasons ago.

Legit, I can't believe he didn't break both tibias. It was a horrific bloody mess.

So, yeah, while those would be a great exercise to build some explosive muscles, they're not ideal for him.

Those all build the calf muscles primarily anyway -- we covered that doing hill repeats.

Now, there are three players on his awesome new team this season and they skate like, well, they're heads and tails above their peers. Like, my son has never had a single kid on his team before that skates like this, let alone, at least three of them.

It's super apparent what they do differently too -- they stay low and they fully extend with every single stride.

Like, I'd imagine the entire trio could do 5-minute wall sits with minimal discomfort.

So much can be learned from figure skaters...

But, yeah, these three pre-teen teammates could easily make the shoot-the-duck their goal celebration and I think that'd be awesome. It's not easy.

And that's when it hit me -- squats and wall sits and box jumps aren't the ideal solution for my son because they don't fully align with the skating motion.

I've always said that skating is such an un-natural body movement.

Like, it's an awkward but coordinated series of movements to shift your body weight around.

While wall sits, squats, and box jump are definitely beneficial for a hockey player, none of those exercises really touches on a skating like movement and I'd like to make sure that's a part of whatever exercise he needs to do to build strength in the right areas. 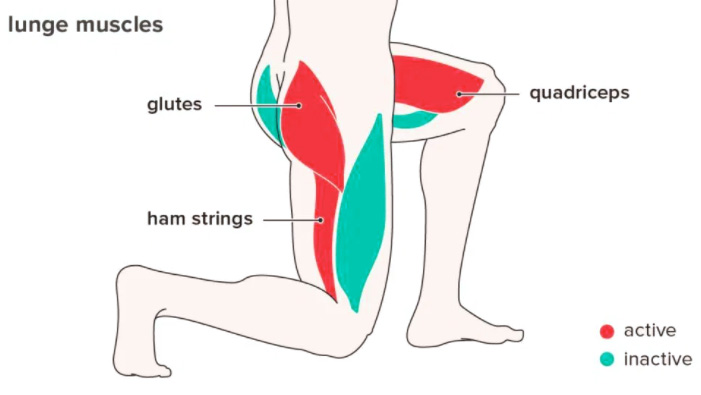 Lunges build strength in your quads, ham strings, and your glutes -- basically, the parts that create what is commonly referred to as the hockey butt and, also, the parts where my oldest is severely lacking.

Better yet, it works each leg individually.

One leg and then the other.

Sure, it's still a little different cause you're lunging ahead on solid ground but pushing back when you're on the ice but it's about as close as you can get, positionally.

One leg, then the other leg. Just like skating.

Even better, it's still working both legs at the same time, but different muscles. I already said that, right?

But I'll say it again -- the hamstring on the back leg is getting worked while the quad on the front leg getting worked...back and forth.

And on the ice, especially with kids, it's imperative to make the drills as similar to hockey specific game situations as possible. Practice like you play. Play like you practice.

I think that, for my aged kids anyway where they're too young to be pumping iron in a weight room, making the off ice stuff as similar as possible to game-like situations is a huge benefit too.

My kid's primary weakness -- tiny thighs -- requires lunges and, well, lunges have been our go-to off ice workout this summer for that reason alone.

We're doing between 400 and 800 meters in 100-meter reps, daily, on the synthetic turf at the local high school.

Day one was brutal.

I did it with them to show them how to do it correctly and, let me tell you, it's July now and I can *still* feel the burn from day one. Getting old sucks.

For the kids, day five wasn't so bad.

And by day twenty, it was easy -- they said so themselves even though I can see the struggle is real for the final 50 meters or so each day -- so we added an additional rep or two and a torso twist every second rep.

Zero complaints -- takes around 20 minutes including the drive to and from the track/football field.

Quick and easy workout -- those are the very best kind!

And as successful of a routine as it's been so far, I think they also received an unexpected but very welcome additional bonus.

For the past three Sundays, there's been a flag football group using the field while the kids are doing their lunges down the sideline.

They can pull off the half shirt with compression shorts look with ease.

Intimidatingly muscular...and not the type that skip leg day either.

Basically, there isn't a single meatball out on the field.

Not one. Well, besides me tooling around the track reliving my own glory days at a pace that can only be classified as...casual.

But, for real, the routes these guys were running and the lasers the QBs were firing were, well, let's just say that even in my prime -- 25+ years ago -- I'd never be able to hang with this group.

There was never an "everybody go long" type of play.

Crossing routes and jukes off the line were happening on every single snap.

I'd venture to guess 95% were former high school players, 80% likely played in college, and probably 20% of them were D1-level players. All flashy wide receiver, defensive back, running back, and quarterback types.

Being flag football, there weren't any refrigerators out on the field. It was an all passing, finesse, game.

To be honest, since I know that current NHL players play in men’s leagues during the offseason, it wouldn't shock me for a moment if some dude on an NFL training squad or even an active player was out there too.

Call me crazy -- but if it hadn't have felt weird, I'd have sat in the stands and watched their entire game. It was high level. No joke. This was not some lazy game in the park.

We were there for a pick-six -- with, like, an 80-yard Devin Hester or Deion Sanders-like return through traffic -- and the hootin' and hollering as it was unfolding was something special.

Grossly inappropriate, sure, but I believe my kids took something in from their intensity.

Intensity that even I found unexpected in a "friendly" Sunday morning flag football get together.

These guys -- on both sides of the ball -- took every play seriously and gave it everything they had...even though it was early Sunday morning on a desolate high school football field.

One guy who had a pass go off his fingertips immediately dropped and did 10 push-ups before heading back to the huddle. I'd never once seen someone do that in a pick-up style football game.

With this crew, it was commonplace.

Even the defensive players were doing it when they got beat.

That's what I hope my kids took away from it.

And that head or shoulder fakes are super effective -- even against elite athletes.

But on top of all that, I loved the communication out on the field. My kids claimed the language was far, far, far worse than anything they'd ever heard in the awful rap music they claim to enjoy but there was the constant communication going on.

Before the play, during the play, after the play -- non-stop chatter.

My oldest once had a coach that encouraged the kids to talk, among other things, on the ice and on the bench -- and he was always a talker but the past two seasons, he's clammed up with completely new rosters around him.

I get it, it's awkward being the new guy (or having a confidence crushing coach), but I'm hoping that opens back up again and I suspect these flag football players might have been the kickstart he needed.

Just filter out the language.