Near our house, literally right out the front door, there's a hill.

It's not steep or anything but, well, just to give you an idea, it'd be struggle to ride a bike all the way up.

If I had to guesstimate, and using a topographical map I found online, I'd say it's around an 8% grade.

I won't bore you with the difference between grade, slope, and incline.

They don't so much matter, the exact numbers, that is. I've always been more of the mindset that when you come to a hill, you run up the damn thing.

Clearly, running up hills is something somewhat dear to me.

I've mentioned a few times on here that, back in the olden times (mid 1990's), I was very strong distance runner.

Hill training was a big part of my training regimen. Whether it was just a long hilly run, or indian sprints (can you even call them that anymore?) with other runners, or just repeatedly sprinting up the same hill over and over again -- I knew how beneficial they were to my training.

They're lower impact than running on flat ground (meaning it doesn't hurt your knees or shins nearly as much) and builds muscle far faster. You'll feel your legs getting stronger after a day or two. It's like harder and easier at the same time...if that makes sense.

Every shift is a sprint.

Endurance and stamina need not apply.

Kills me inside, a little bit. I'm not a sprinter. Never was.

I could train my boys to be elite distance runners -- for that, I'm totally qualified -- and I do give them pointers here and there (shoulders, arm bend, hands) but at this point, while ice hockey is their primary sport, I'll never have them run, all out, more than 400 meters at a time.

Anything more than that has no benefit for a hockey player.

Okay, back to our hill.

So, for us, this is the closest and steepest hill around. Convenience matters.

Even better, it's on quiet street and the incline is only around 150 meters long...meaning it's absolutely perfect for the type of hill training a hockey player needs.

Would I prefer it be a little steeper?

Sure...but I don't want to kill the kids either.

Now, a little background on my two oldest. 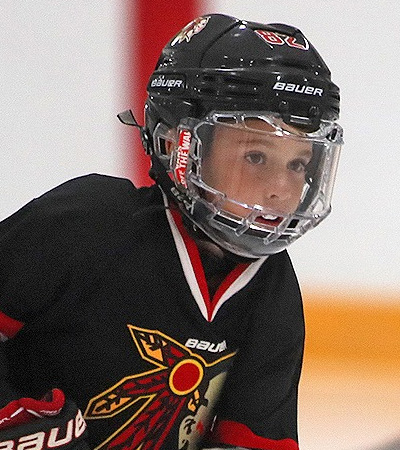 Duncan is an undersized peewee player. As a hockey player, his top asset is his skating. Frontwards, backwards, edgewise, he figured it all out long before a majority of his teammates and way before he should have.

All of those fancy transitions that players routinely practice around cones but rarely ever use, err never, in a game cause they don't realize why they practice them? Yeah, that's not him. His footwork is on point.

The downside is that he lacks strength. And that absolutely kills his speed.

Being a great skater doesn't really matter if you're not fast or powerful.

As such, being very aware of his inept speed, he tends to resign himself to taking a defensive position rather than trying to outskate an opponent to a loose puck. That's gotta stop -- it's really just a head game. Mind over matter.

He has to convince himself that he's not that slow while also boosting his leg strength at the same time. 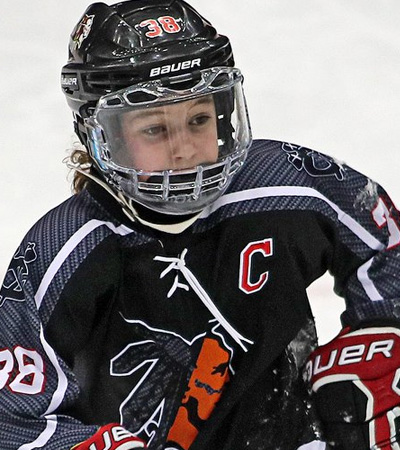 Henrik is a squirt that's playing up a birth year this season.

He's not undersized. He's not weak. And his skating is terrible.

Okay, I'm selling him short there -- his skating isn't terrible but when compared to his brother...well, it's hard to believe they're related or have pretty much had the same coaches throughout. Totally, totally different.

Henrik's main issue, not only on skates but even when he runs, is that he's not light on his feet.

He's a stomper. A real heel pounder. A one man herd of elephants.

Okay, so I have one weak legged kid that defeats himself mentally before a race even starts and another kid that plants his feet incorrectly...and I've been using hill training to solve ALL of those issues. At once. 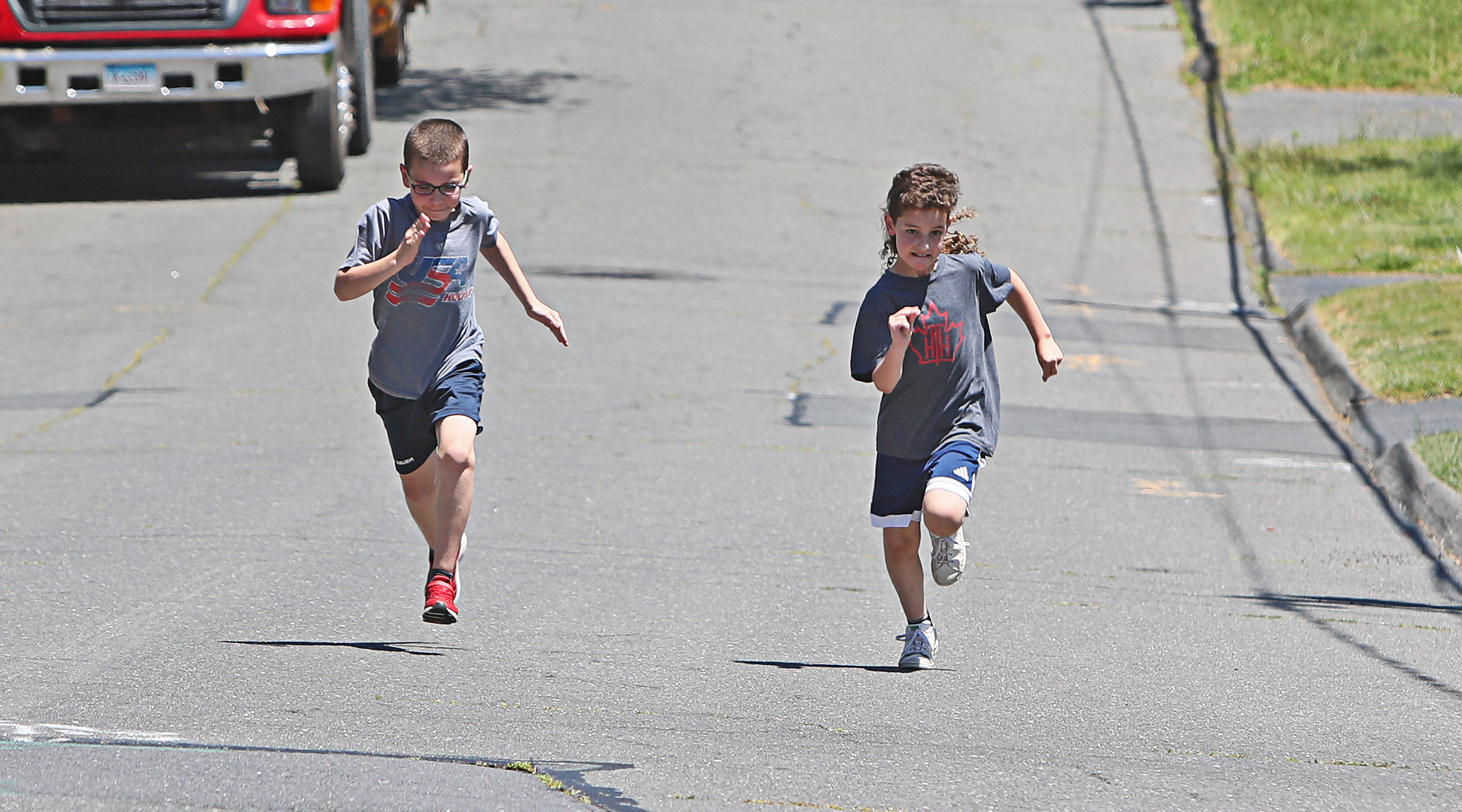 We've been doing short rep hill repeats each day -- laddering up from 10 reps to 20 reps week-by-week.

For the non-runners out there, we start at the bottom of the hill, run to the top as fast as we possibly can, and then walk/jog back to the bottom and then do it again without taking a break.

We're three weeks in now so, each morning, we're running 14 sprints up the hill.

It's not that bad -- it's fast paced and really doesn't take us more than 30-ish minutes to complete each day. In fact, you don't really even get the chance to start sweating while you're actually doing it.

Post-workout is a different story... Drenched. 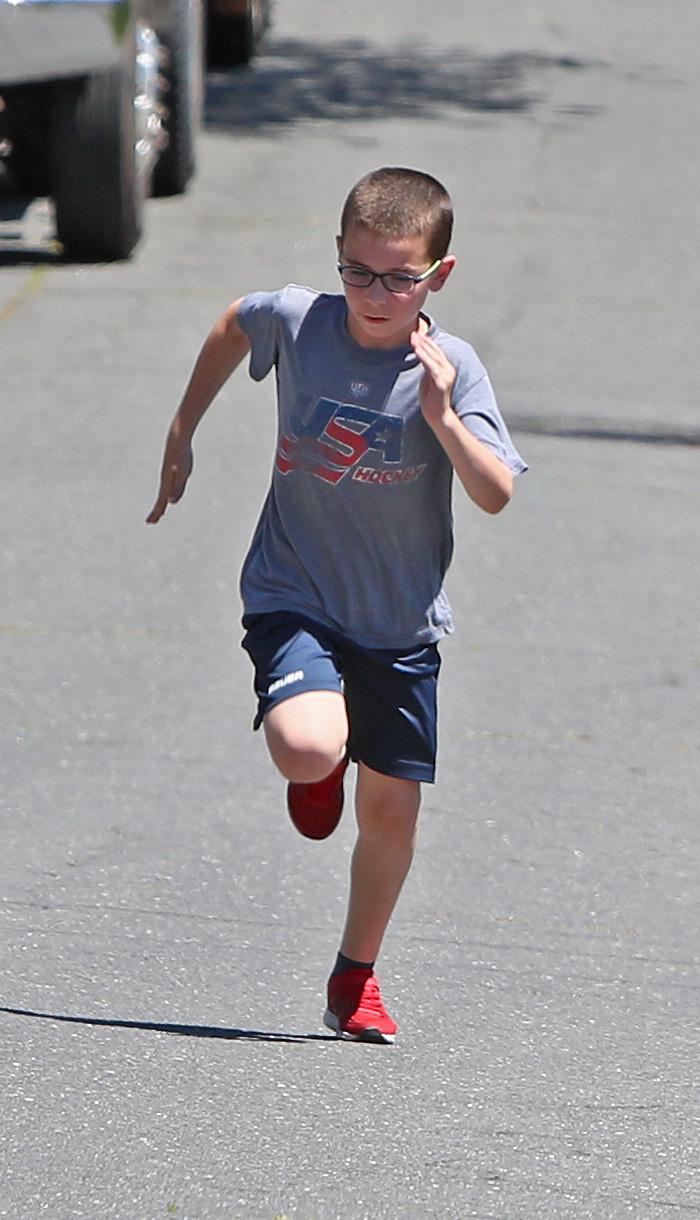 So, for Duncan, the hill training is simply a leg strength exercise and it's totally working.

His achilles' burn. His calves burn. His quads burn. And his hamstrings hurt too.

All four of those areas are precisely where he's currently lacking so it's an all-encompassing four-for-one lower body exercise for him.

Further, as we've been doing them each day, I've come to realize that his breathing is all over the place.

Like grunting and panting and just, well, totally gassed after the first few reps.

Like, really struggling as we continue...because of his rapid and inconsistent breathing. His VO2 max would likely be dreadful as his breathing is so inefficient. I can only guess he gets like that on long shifts on the ice as well.

So we're working on that -- inflate your lungs until they're fully inflated and then deflate them until they're nearly empty at a controlled pace.

For me, I calmly inhale through both my nose and mouth at the same time for 4 strides and then exhale a little more strongly through my mouth for 3 strides. That was taught. My high school coaches taught me that.

If anything, my pace of breath is slower when I run than it is when I'm idle simply because I inhale more with each breath. Weird -- and maybe just me as I can have a full conversation while running full speed -- but it's going to help Duncan immensely to utilize his nose and not be gasping for air at such a rapid pace.

I can't believe I didn't notice this sooner.

My luck, this new breathing technique will cause his bubble to fog up -- an issue his teammates struggle with but he's never had.

Regarding the head game -- his younger brother often starts each rep like a rabbit which works out perfectly. He gets way out front and, at first, Duncan was doing exactly what he does on the ice...just convincing himself that catching up wasn't in the cards.

I've been running alongside him giving him encouragement trying to push his pace and showcasing to him that Henrik's pace peters out about half way up the hill where it really gets steep.

Now, anyone with siblings knows that it's humiliating to be beaten by a younger sibling so, guess what? He's finally starting to grasp that just because someone is way ahead doesn't mean you can't catch them...or overtake them.

I'm hoping this mental lightbulb moment translates on the ice...and that the physical side of the muscle development only enhances it. 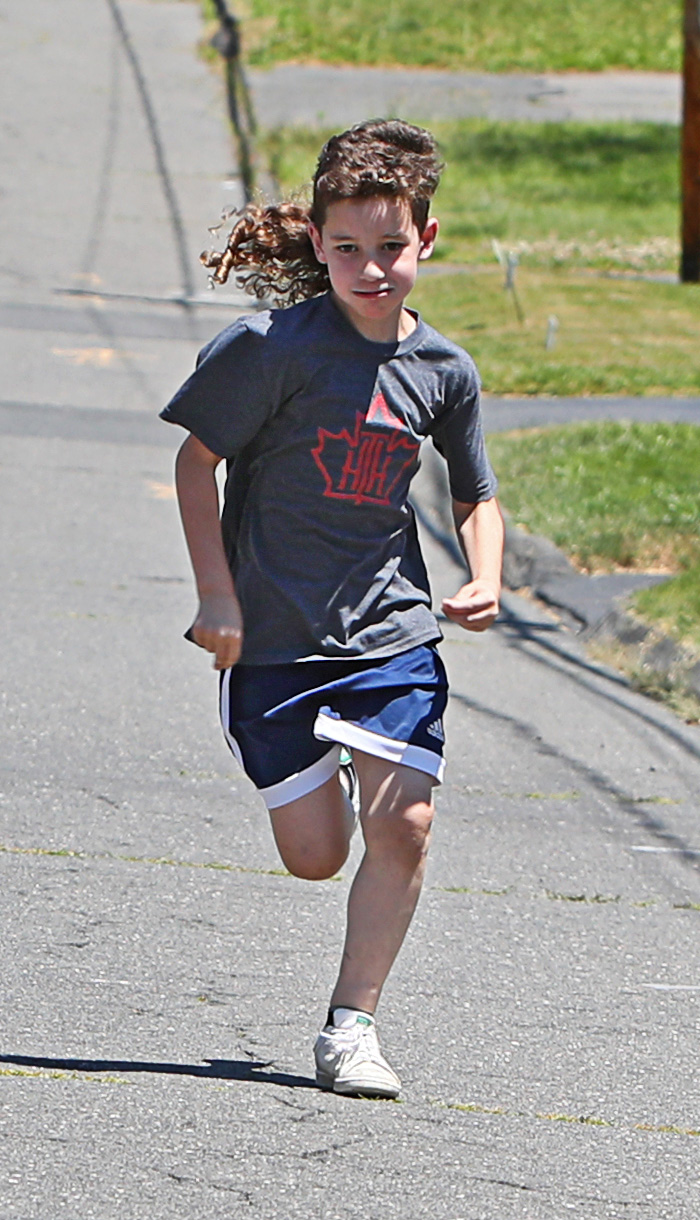 Now, for Henrik, my original plan at the onset was to just "use" him as a pawn to push his older brother and get him a little exercise in the process... A tag-along, essentially (he's a middle child -- don't judge), but hill training ended up being the ideal way to automatically correct his stompy form.

See, thing is, while trying to figure out for myself what was wrong with his stride, I found it really awkward and physically uncomfortable to plant my foot, heel first, when running

And, as a (former) runner, it's always kinda drove me bonkers that my own kid runs...wrong.

I've tried to explain to him that it was kinda like hitting the accelerator and the brake at the same time -- not that he can drive or anything but video games have taught him that, well, that doesn't work.

Using his bike as an example, in hindsight, probably would have been a better idea.

Point is, you dig your heels in to slow down.

And if you want to go fast, don't even let your heels touch the ground.

In a nutshell, that's how running works below the waist.

He either didn't get it...or couldn't do it. I'm not sure which.

But, when you add a steep incline, you're forced to plant with your forefoot. Like, his toes hit the ground in front of him before his heel has a chance to make contact.

For the first few days, it wasn't uncommon for him to stumble and, essentially, fall *up* the hill.

It was almost hard not to laugh.

But now, he's figured it out. It's both his toes and the ball of his foot that are making initial contact with the ground on each stride. It's also allowing him to outrun his older brother more often than not...meaning that it's working as I'd hoped.

My one concern is that as he reaches the crest of the hill...the stomp sound returns. I'm not certain if it's because he's slowing down (where a harder impact would make sense) or if he's resorting to his normal form since he's on a more level surface.

I don't intend to test it though -- we're sticking to short rep hill sprints.

That's all a hockey player really needs when it comes to running.