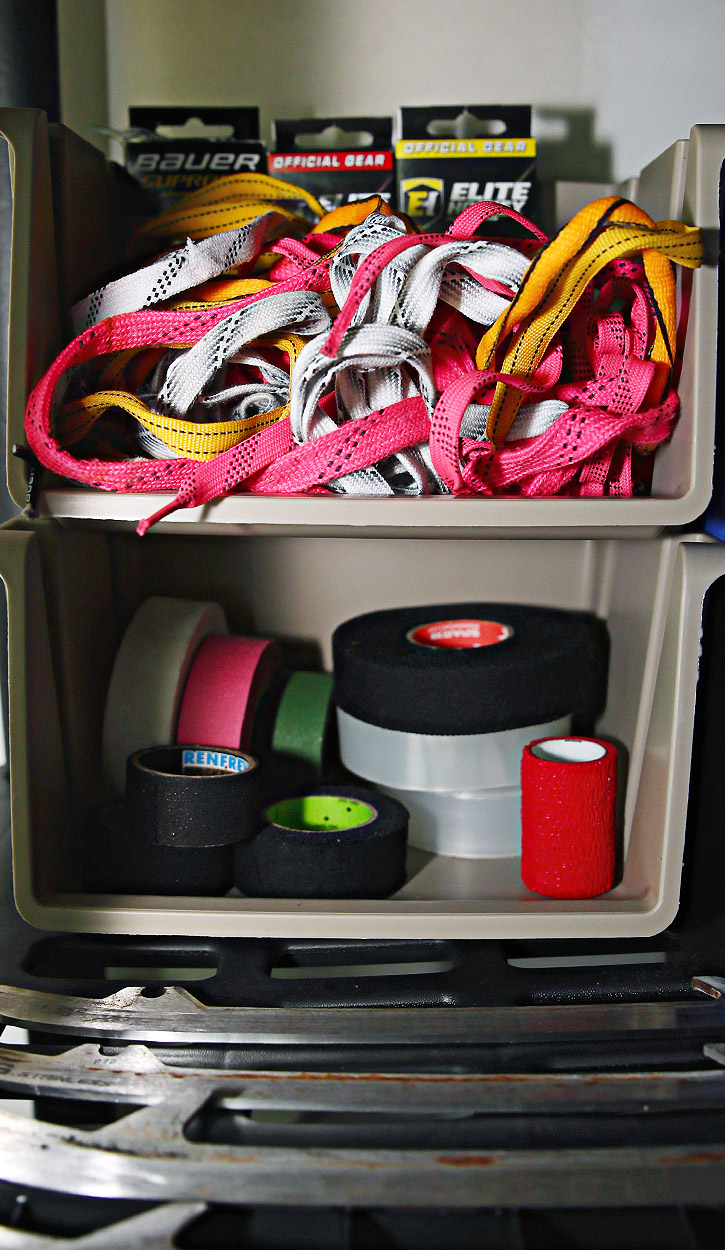 My philosphy is to have the blade of the stick actually look like you've played the game before verses the brand new "I just used half a roll of tape" look at the start of each game.

We don't use shin guard tape either. Again, properly fitting shin guards and socks negate the need for it.

Yeah, there's no getting around laces.

I mean, as insignificant as they might first appear, they're one of the most important pieces of equipment for a hockey player.

And maybe it's just me but it always seems that when you find the perfect pair of laces...one of them snaps on you. Ugh.

And of course, without fail, you haven't the foggiest clue of what brand lace you were using.

And that's the downside of so many varieties and options.

I've spent far too much time indecisively staring at the lace selection at our local pro shops.

Or, worse, comparative shopping for them online where you can't actually get a solid visualization of what they really look like or how they feel to the touch.

But here's what matters most -- the tip style, the thickness, and the amount of wax.

Let's start with the tip.

So, if you wear Bauer or CCM skates, the laces that come with these skates, right out of the box, look super cool.

Like, we're predominantly a Bauer family and the laces have, like, this white to grey to black gradient sewn in with hints of gold. They're really sharp looking and would match their Supreme line's color scheme beautifully. The tip is even emblazoned with the Bauer wordmark on the higher end skates.

I mean, aesthetically, these are the best looking laces on the market...even on a non-Bauer Supreme boot. Sure, that's just my opinion but when it comes to nice details, they really hit the nail on head. These laces are 🔥.

Here's the thing, though... Outside of their sweet thread pattern...they suck. 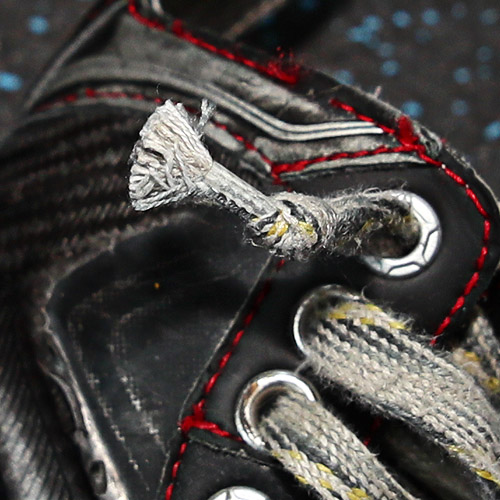 First strike is that the tip style is just like what you'd get on a regular pair of sneakers -- you know, that plastic thing at the end.

Well, anyone that's played hockey for more than a month knows that those fall apart. Rapidly.

Within a few weeks, you're having to thread that top eyelet of your skate with a frayed mess. It's like threading a needle with a sting of yarn. Good luck with that.

So, when shopping for a replacement lace, always buy a lace with a molded tip...but not any molded tip.

Sure, if "molded tip" means a really thick piece of scotch tape holding it all together...

You almost need to inspect them -- if they look like something that will turned into a frayed mess if you crushed them with a pair of plyers (or if they resemble regular sneaker lace tips), yeah, you don't want those.

A true molded tip should look like the lace has been crimped in wax.

Sure, it looks less "finished" but lasts so much longer. 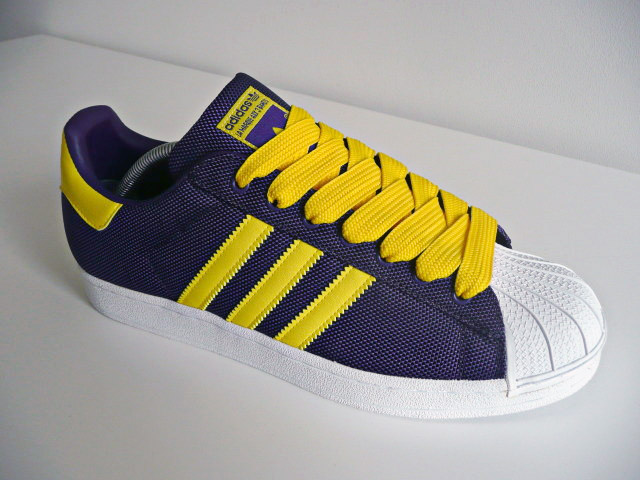 Second strike is the thickness.

They're not crazy wide...but they're still too wide. The laces that come with Vapor skates are ridonk.

Like, almost like those giant school colored laces that cheerleaders used to lace their cheer shoes up with back in the late 80's, you know, where they'd sometimes make a big giant bow too?

I mean, on their own, it's almost a struggle folding these laces through the eyelets...even with a mint condition tip.

Wider is not better.

Wider is not more durable.

Wider is not easy to tie.

Wider doesn't stay tied on it's own.

Wider is just a bigger hassle.

Oh, and don't even get me started on the "oval" laces.

What monster came up with that idea?

And, worst of all, they're not waxed.

Now, I know there's been a long raging debate in the hockey community on waxed laces vs. non-waxed.

I used to be a huge proponent of non-waxed laxes because the waxed variety tore apart my hands while tying them and, subsequently, they were impossible to untie.

Waxed laces aren't like that anymore. If anything, they're "lightly" waxed now.

The biggest benefit to waxed laces, I've come to learn, is their resistence to moisture.

When my kids wear non-waxed laces (like, when their skates are brand new), it's only a matter of time until those laces smell like mildew. Or worse. Far worse.

Scold me for not drying their equipment properly all you want but I know that I'm not alone. I've tied enough laces for countless kids that aren't even mine to know that unwaxed laces absolutely reek after a few weeks.

Ugh, it's horrid just thinking about it.

Legit, the bathrooms in our local rink are among the most disgusting on the planet but, after tying a teammate's skates with unwaxed laces, I'll venture in there simply to eliminate the stank from my hands.

Waxes laces don't stink. As much. That's a fact.

I mean, it's not even a contest really.

As for hurting the hands, waxed laces these days don't. I mean, I've got some pretty solid "skate tying" calluses to begin with on the outsides of my pinkies but the laces aren't tearing into them.

They also hold better than un-waxed -- great for kids just getting used to tying their own skates -- but they're not absolutely impossible to untie like they were 30 years ago.

Okay, here's the recap -- you want laces with tips that won't fray, laces that will easily fit through the eyelets on your skate, and laces that are lightly waxed so they'll stay more secure with the added bonus that they'll never smell like cat pee.

No, really, let your gloves stink up your hands...not your laces.

So, as you've probably already surmised, I've spent a ton of money on garbage laces.

That's an actual picture of our "waste" pile up at the top of this article.

Actually, we use all of theses terrible laces to repair our nets at home so, in that way, crappy hockey laces do still serve a noble purpose.

One of our nets is actually entirely held on by discarded skate laces. 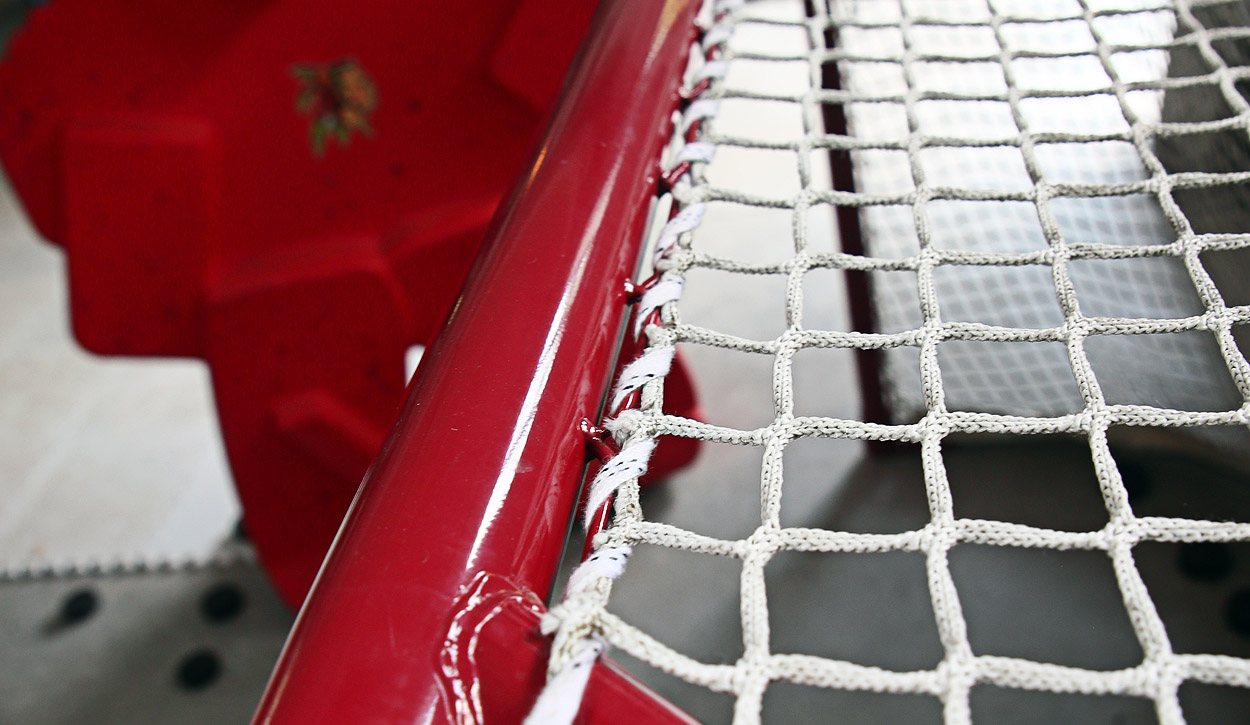 But, even still, frustrated by how much money I'd spent on laces that were just terrible or how bad they made my hands smell, I finally started to log what we'd purchased to narrow down what brands we liked and didn't like.

And, call me crazy, but I'm going to share with you what we've found the perfect lace to be.

The very best laces we've ever encountered are manufactured by a company named Silfrae and they get high marks on all three categories -- tip, width, and wax-content.

Here's the crappy part with them -- they're almost impossible to find.

I mean, they're on Amazon but, as such, it's a gamble whether you're going to receive *exactly* what you ordered. It's been very 50/50 for us -- they always come in a ziplock bag and, well, sometimes they're crappy.

Kinda bush league that I'm touting something like that, right?

"Hey, these laces are awesome but you'll never find them. Good luck."

So, instead, here's our readily available go-to recommendation when it comes to hockey laces. 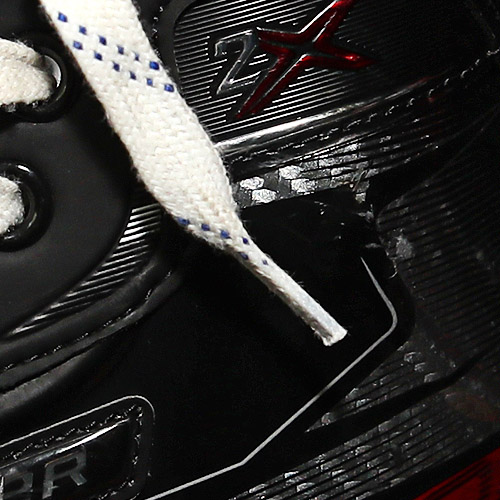 All three kids, and me, use PRO-S700 laces manufactured by Elite Hockey.

They've got the molded tip that never disintegrates, they're narrow, and they're lightly waxed.

Even better, the only come in black, white, and yellow.

That lack of color option rubs some folks the wrong way but, in my book, dress like a pro, play like a pro.

And, really, steer clear of yellow too. Your kid isn't Ovechkin.

But the very best thing about these laces is that they're readily available all over the place.

That said, you still need to be careful as Elite Hockey makes a ton of different laces and most are at that same price point -- even those evil oval laces.

You do not want the X7 version -- which come in lots of colors.

You can thank me later. 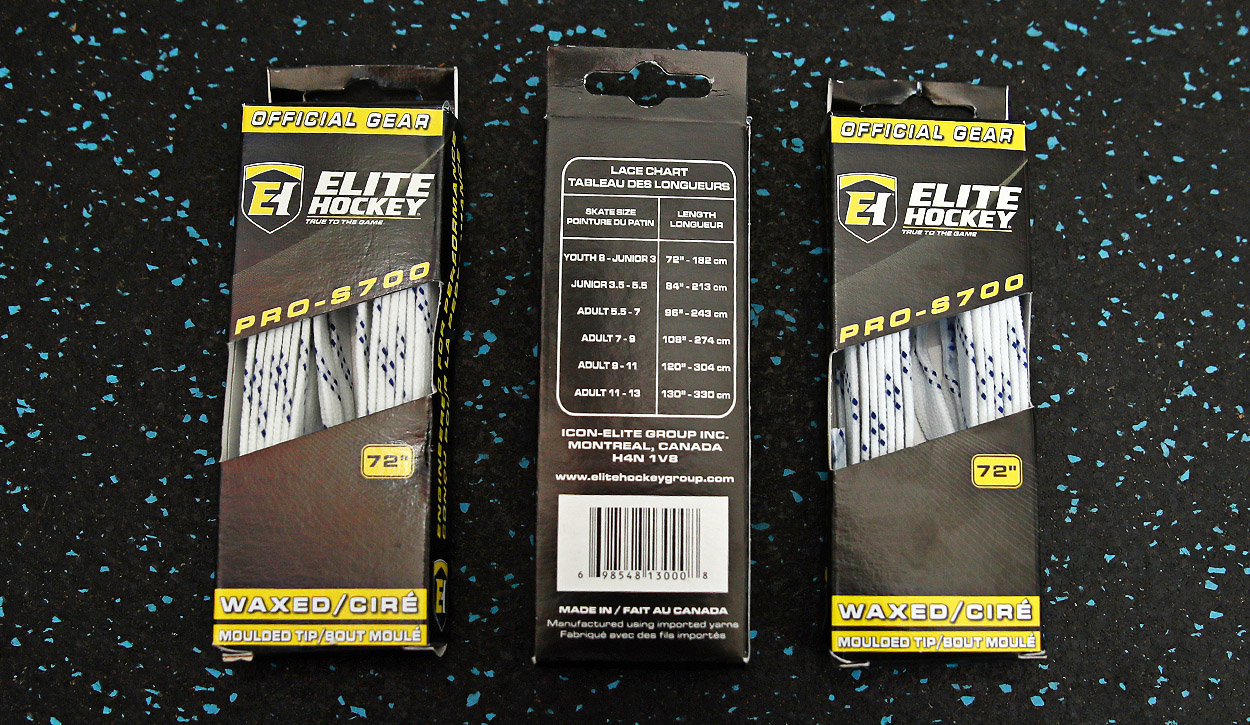 Related Articles
» What is Spring Hockey?
» Training Aid Overload: Hockey Room Essentials
» Realistic Expectations: Take the Dad-Goggles Off!
» Playing Defense is NOT a Punishment
» The Pluses and Minuses of Private Lessons
» Youth Hockey Tryout Tips for Kids Under 10
» Hockey Salad Days
» Will the 2020-21 Youth Hockey Season even Happen?