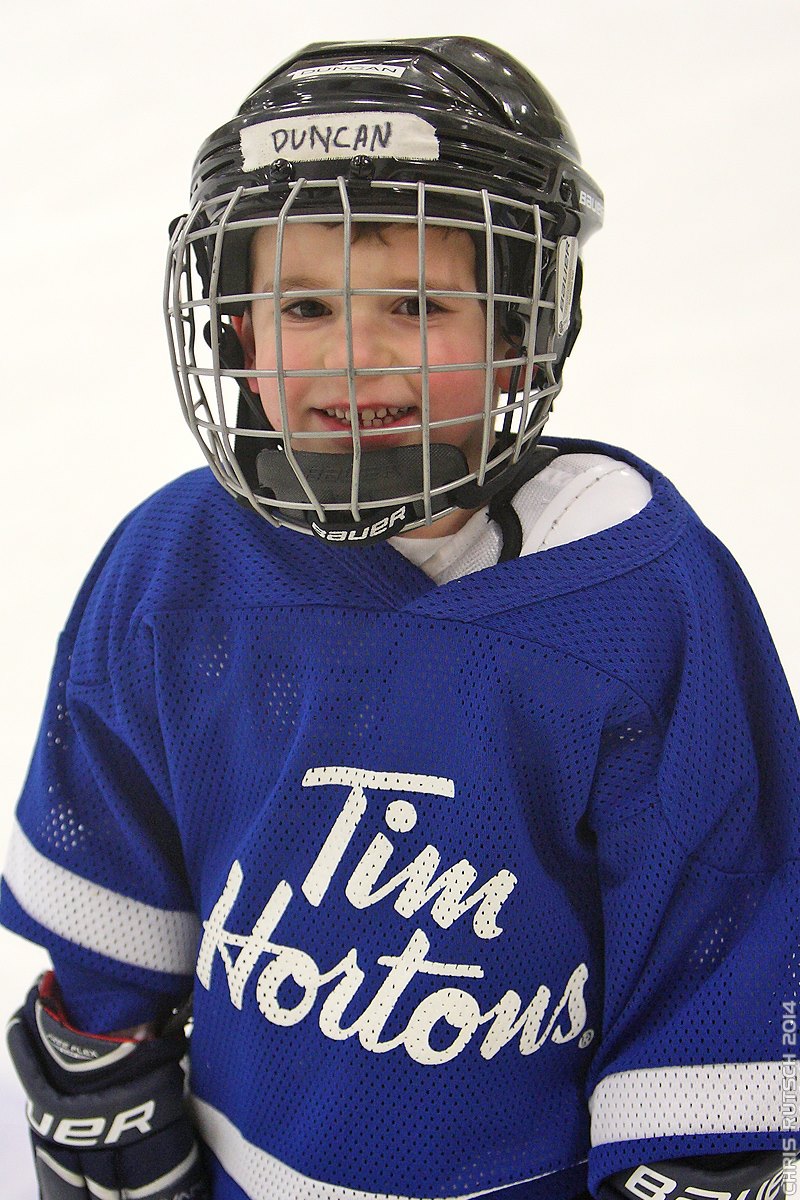 When my oldest son Duncan just started getting going with organized hockey, in a development program (just barely above learn to skate), he was over the moon before, during, and after every single ice time.

Just putting on the equipment transformed him into a different person -- you couldn't wipe the smile from his face.

Even though he was among the least skilled, it didn't bother him.

Or, maybe, he just didn't even notice.

There wasn't a single hint of embarrassment or apprehension with anything.

He thought he was awesome!

He landed in a group, alphabetically, with Dominic.

Dominic's name started with a D.

That was the only thing they shared in common.

Now, I'm not saying he was a bad kid. He wasn't -- he was just bigger, stronger, and more skilled and was using those assets to his advantage.

But...he was also purposely chasing my little guy around during the open "free skate" portions of practice just simply for the satisfaction of knocking someone smaller down. And making sure he was down. Over. And over.

Don't even try to get back up, kid.

Okay, he was mean.

Prototypical bully, all the way.

Like any parent, I was laser focused on my own kid and wasn't exactly thrilled with the situation.

But, being levelheaded, eh, it's not that big of a deal.

One bad ice time isn't anything to worry about.

Then it happened again the next day.

And the weekend after.

And, hardly shocking, by that point, my kid wasn't smiling anymore.

I'd instructed him to "avoid" Dominic and he was...

I mean, for a four-year-old, he was doing his best...but he was also being "hunted" by a 7-year-old.

Anyone with kids knows the difference between a 4-year-old and a 7-year-old.

It went on for a number of weeks -- the situation was less than ideal and it was apparent that Dominic's parents, once I'd narrowed down which ones were his, were blind to what was occuring.

I never said anything because, being new to youth hockey, I didn't want to be "that" guy but will admit -- I did briefly consider switching programs.

After around a month, I did come to realize that the coaching staff had begun to keep a keener eye on Dominic -- my laser focus had failed to notice that he was a little rough with a LOT of the kids out there -- not just mine.

Of course, that didn't really make me feel any better. Or boost my son's confidence either.

But, at least, to a certain degree, I appreciated that it wasn't going completely un-noticed while also happy that I hadn't had to mention anything or make a scene.

For most scrimmage type drills, he was often relegated to playing goalie to limit the opportunities of hurting anyone.

Thankfully, my son did stick with it -- hockey, that is -- and got better and better.

A few practices later, Dominic couldn't catch him anymore and, I'm guessing, moved on to another, easier, target.

The problem, for us, took care of itself.

I think it took care of itself for Dominic too -- last I'd heard, he was a pretty solid goaltender.

So, yeah, the best advice I can offer for dealing with an on-ice bully?

I know, I know...that's not the greatest advice but that's not what this specific article is all about... 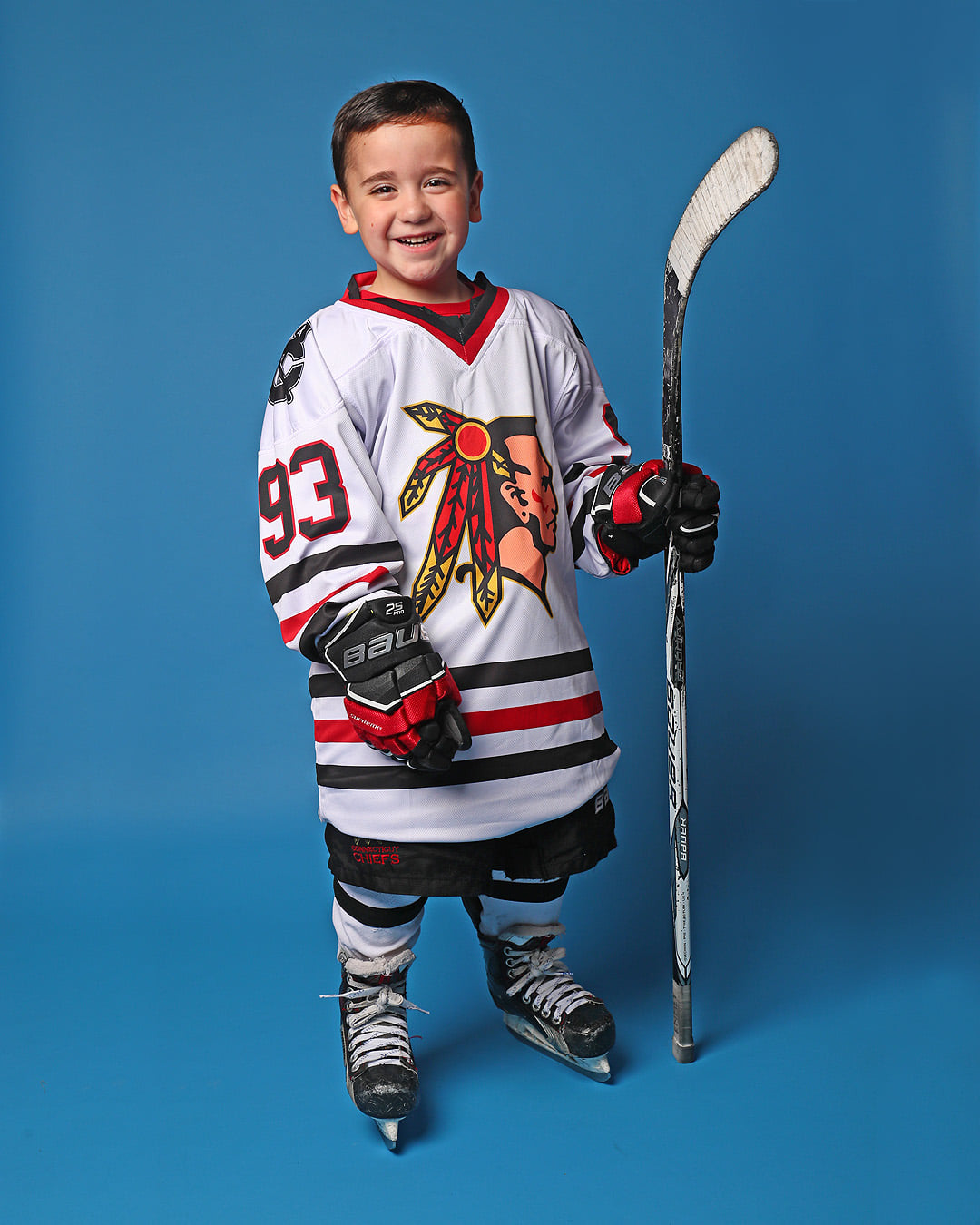 Fast forward to today and my youngest son, Emmet.

He's the smallest guy on his team and, in games, often the youngest player on the ice.

Trouble is -- he's the Dominic. Don't let the smile fool you.

If there's an opportunity to cross check or run someone into the boards, he takes it every single time.

I'm a pretty empathetic guy so, like, it takes me back to when my kids were really young came home from daycare for the first time with a bite mark on their body and I was, like, furious wondering who the parents of the evil vampire child were and how they could even look themselves in the mirror.

Like, for real -- so angry that I couldn't think logically.

Everyone knows vampires can't see themselves in the mirror.

Except for me. In that moment.

And then a couple weeks later, you have to shamefully sign a form cause your kid tried to eat someone else and you feel like an idiot. Happens to us all.

And, with that, you see and feel both sides of the issue -- being the attacker and the attacked -- within a short span of time and feel kinda crappy in both positions.

But, with this, this is new to me. My kids have never been considered aggressors since those couple between biting incidents -- when, really, the kids only had a single tooth anyway -- so I'm still in that awkward stage.

I'm not proud of it.

And my empathetic side has me concerned about what the parents of his "targets" are feeling. That's causing most of my own person grief.

I think he might be the dirtiest youth hockey player I've ever encountered...and I live with him?!

Now, the easy explanation would be to say it's because he has two older brothers that play hockey and the physical side of the game has been encouraged.

My oldest takes 10-minute misconducts every season -- he's not dirty, he just hits like he's a bantam when he's not a bantam yet.

Nearly all of his penalties against are contact penalties -- things that won't be penalties in another year. I pray he doesn't lose that player trait before he gets there -- the current season has been really trying on that front. Outside of a recent 14 PIM game, his physical game has evaporated and that doesn't bode well for him.

My middle one, Henrik, has the ability to turn into the Hulk and just run people over like a freight train. Again, not dirty or malicious, just really aggressive if you push his buttons. If he could better harness that adrenaline and play that way all the time, look out! I'm hopeful that will come with age.

He doesn't pick on specific players -- he's not a bully like that -- but, instead, he'll go after whoever is closest to him whether they have the puck or not.

And that's a pickle I find myself in.

At the mini-mite level, penalty calls pretty much never occur so there aren't a lot of consequences rendered...at the time of the infraction.

I'm fortunate that, for now, he's the smallest player on the ice.

It's cute, and it's funny, and he's not really big enough to hurt anyone.

Except...he's going to hurt someone.

Like, for real, as hilarious as this next video montage is -- and it is funny -- no one really wants to be that kid's parent.

But I'm that guy.

For the past month, every practice, before he takes the ice, we go over the "new" number one rule.

Kills me because I want the number one rule to be "Go fast" or "Get the puck" but, for him, right now, it needs to be "No hitting."

Most ice times, of late, he stays focussed for about 40 minutes...and then resorts back to checking from behind and making no attempt to attain the puck.

I'll bang on the glass, he'll look over, shrug his shoulders, and then go right back to being a pest.

It's a tall task to reason with a 5-year-old. Every parent knows that.

And it's really out of character too -- outside the plexiglass enclosure, he's not aggressive at all.

Inside? He's an animal.

I guess that's a good thing.

Or maybe not. I mean, they've put up plexiglass all over the classrooms at school now...

But, yeah, things seemed to be trending in the right direction and then, a couple of weeks ago, he leveled a check from behind in practice that was brutal. Just brutal.

Granted, the kid had the puck, but it was egregious.

He should have been sent off the ice. I want to hope that had it happened in a game -- even a low-level cross-ice mite game -- that the referee would have levied a major penalty and a game misconduct.

I've never once seen that happen with kids this young, but I hope that it would.

And that's where it's a tough position -- I've seen young players have the physical part of the game removed from their arsenal and never return.

Those kids are toast in hockey when bantam comes around. Is so important as they get older that they're able to deliver and absorb contact...comfortably. Safely. 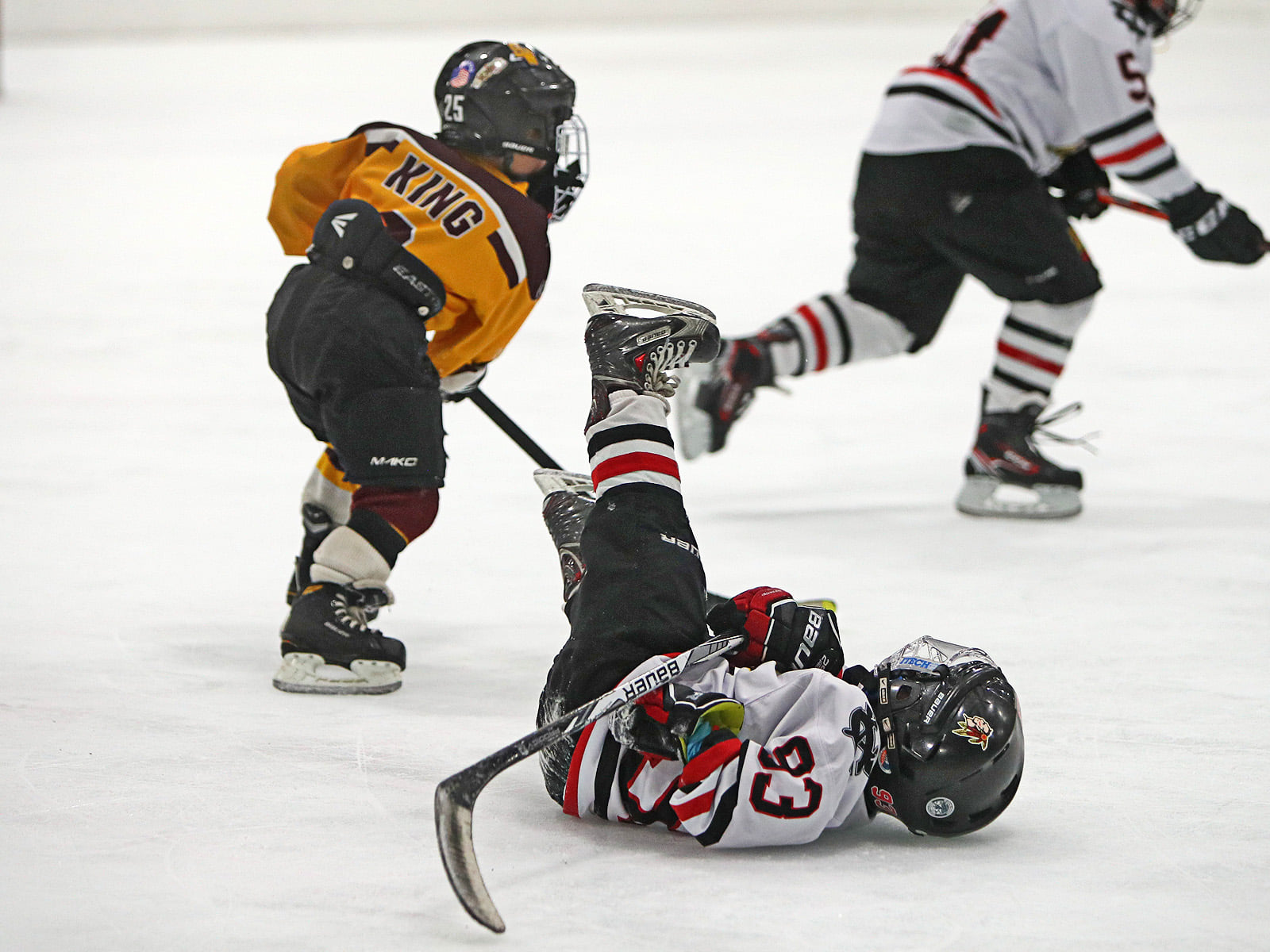 Emmet also seems to be willing to absorb a hit as well. While he does play dead on the ice occasionally after being the victim of a big hit -- another attention thing, I'm convinced -- he's never shown that he's afraid to go back out there afterwards.

Aggressive play shouldn't be discouraged -- that's a trait that comes in really handy when it comes to athletics. You can't teach aggression -- but you can certainly tame it out of existence. I don't want that.

I need tread carefully, like, I want him to maintain that physicality...but I don't want him running players that don't even have the puck.

Mostly, and possibly selfishly, I don't want to be the parent of the kid that could potentially make another kid NOT want to skate anymore.

We're not there yet, I don't think...but we're certainly on the path. 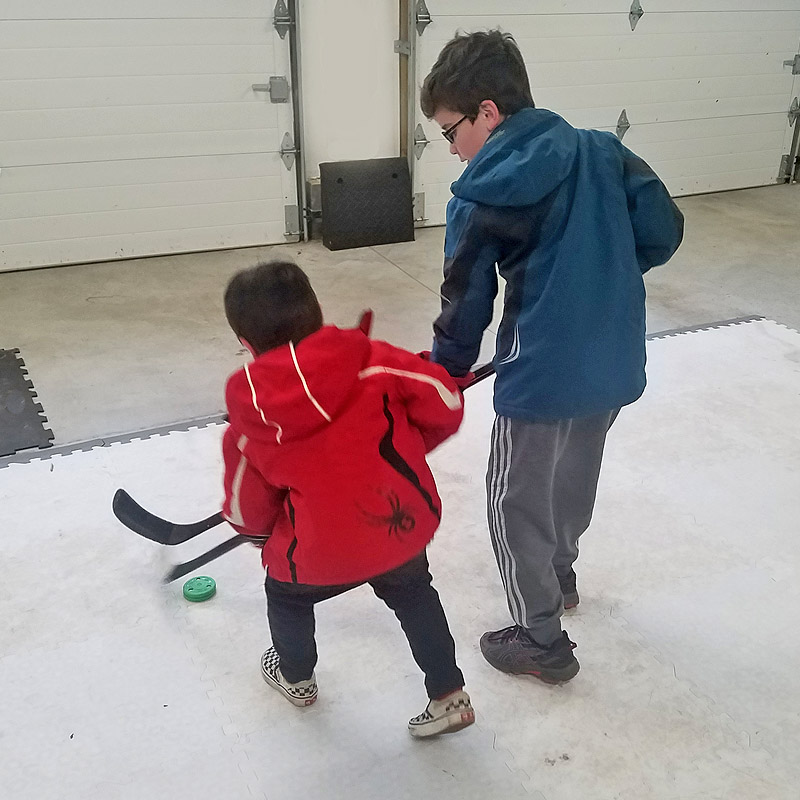 As such, since no kid ever really listens to their parent, my oldest son has been working with him at home on how to "attack" the puck rather than the player.

While it's dreadfully boring for my oldest to protect the puck from his brother, half his age, he gets why we're doing it.

I'm hoping it works too.

I've been "monitoring" from afar and, for the first few days, he was still making his initial contact via a cross check or a BC two-hander to his older brother's shins but now it's turned into more of a stick-on-stick contact first -- followed by a body check that's still a little much for a first-year mite.

Helmets were required for the first few days.

Hoping to dial it down another notch over the next couple of weeks -- stick on puck first and then body in front.

I don't want him to think that it's not okay to bump into another player -- it is.

"No hitting", as a number one rule, isn't ideal.

Gingerly looking forward to what the next practice (and game) bring.