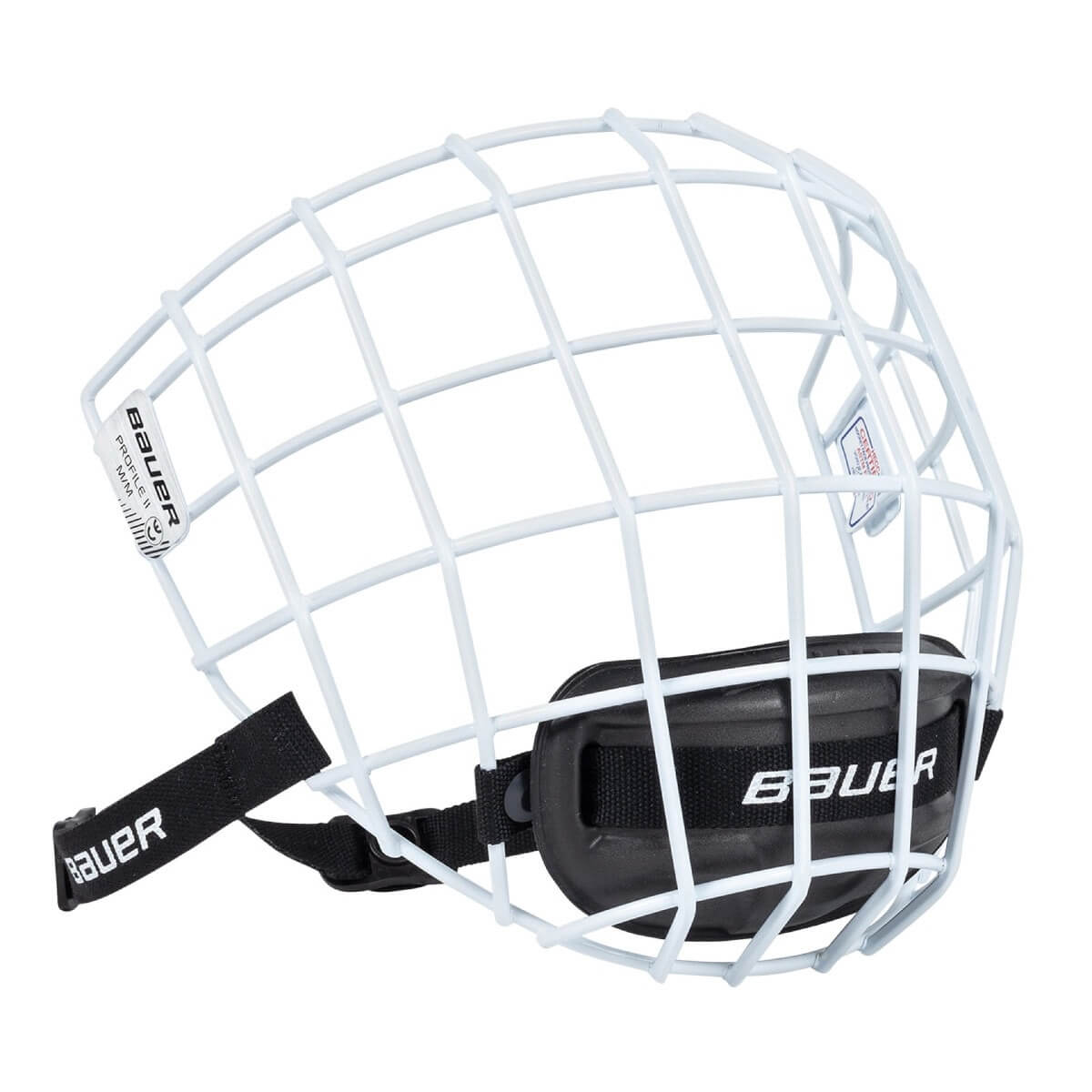 Hockey style changes from year to year -- and repeats itself each decade. Been around long enough to see it all.

In the early 90's, I actually cut the tongues out of a HUGE pair of skates I'd bought at a second hand place and sewed them into my skates so my tongue would really flop and curl over.

Cause I'm old, I still think that looks cool.

For real, styles change on a dime.

But across all of the little fashion statements that come and go in hockey -- one thing has always remained a constant.

In the 1980's, I remember when kids started switching to white cages on their helmets just as the initial popularity of the "new", at the time, CCM bubbles had started to wane. I was bubble kid.

The "pitch" was that the white paint made it easier to see through -- less distracting.

Hogwash if you ask me -- I mean, you're supposed to keep your head up. Right?

If a white cage makes looking down at the ice a more pleasurable experience, you're not very good at this game.

But, yeah, I remember in the mid 1980's, a lot of arena parking lots had huge white spots on them where parents had spray painted a cage right there in the parking lot. It was a weird time.

It's funny too because a white cage wasn't something new -- just look at old youth hockey pictures from the late 70's. It's a fashion thing.

In the 1990's, myself included, some kids started wearing limited edition white skates.

And kids made fun of me.

A lot of kids made fun of me.

I'm sure Sergei Fedorov was chirped relentlessly too. It's no wonder he switched back to a more traditional boot.

In the 2000's, in men's league, there'd always be a couple players that sported white gloves and every single one of them had two things in common...

They were pretty good hockey players playing in leagues far below their ability...and pompous d-bags.

And that's the thing with white gear -- it always seems to find it's way on to players that are, well, full of themselves.

In the 2010's, when memes became a "thing", there were countless graphics poking fun at the "one guy" on every team and every single one of them made mention of either white gloves or white skates. A quick google search brought up this one shared by Howie's. 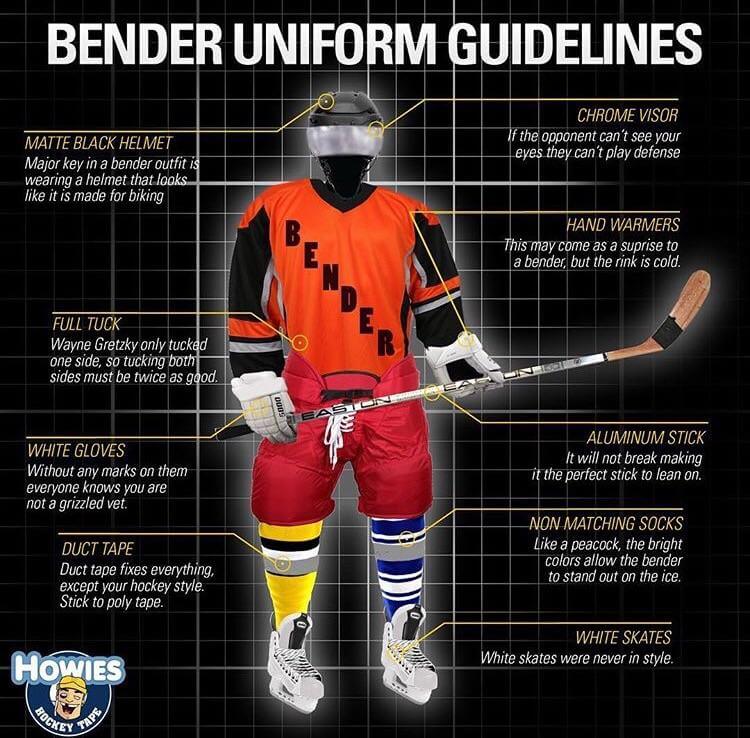 Long story short -- you don't ever want to be "the guy" using anything referenced in this meme. 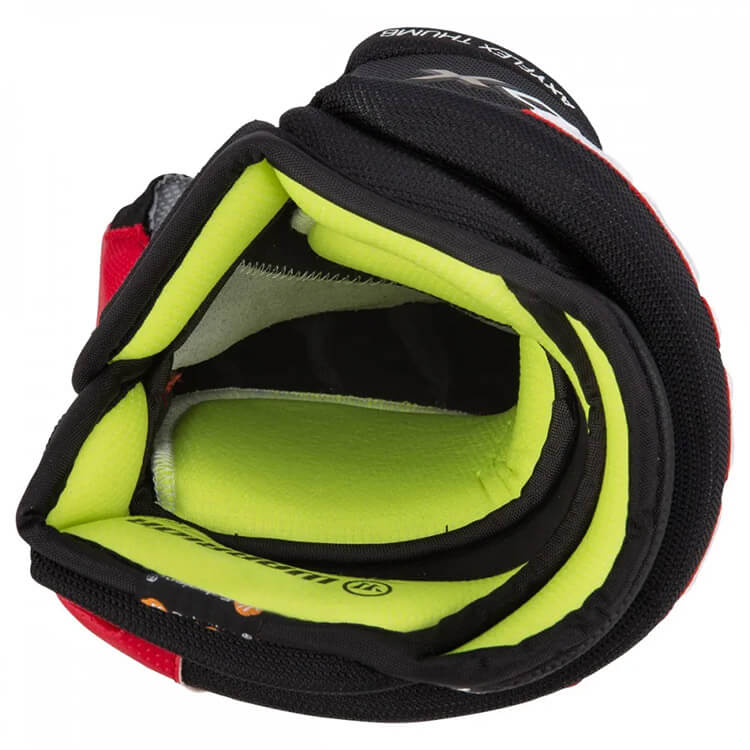 One new trend that I've noticed this season -- 2019-20 -- that needs to go away fast seems to be limited to the teenager and up age group, thankfully.

Over the past 3 or four years, you've undoubtedly noticed that hockey manufacturers have been adding some 'flair' to the interior of their equipment. Pants, skates, helmets, and, well, gloves.

My kids wear gloves that are black/white/red or all black to match their team's uniform. The interiors of those gloves, however, are either bright yellow, royal blue, or this horrible highlighter green color.

Can you say color clash?

And I'm sure you've seen it and know exactly where I'm going -- kids out there on the ice skating with the inside liners of their gloves pulled up and out beyond the cuff.

I don't get the trend, but whatever. I'm sure it'll disappear for good soon enough.

And the other fad that has somehow made a return is, as you've probably already deduced, the resurgance of the white cage.

The first kid I saw sporting one made perfect sense. The kid is a reincarnation of the guy that wore white gloves in men's league 15 years ago.

He's even the same kid that had white Nike skates.

You know, the coast-to-coast, I'm better than you, pompous diva.

Go ahead, wear the white cage to make yourself even easier to identify.

But then I saw another kid.

One team we played against had three or four of them.

Do people not know the stigma that white gear carries? 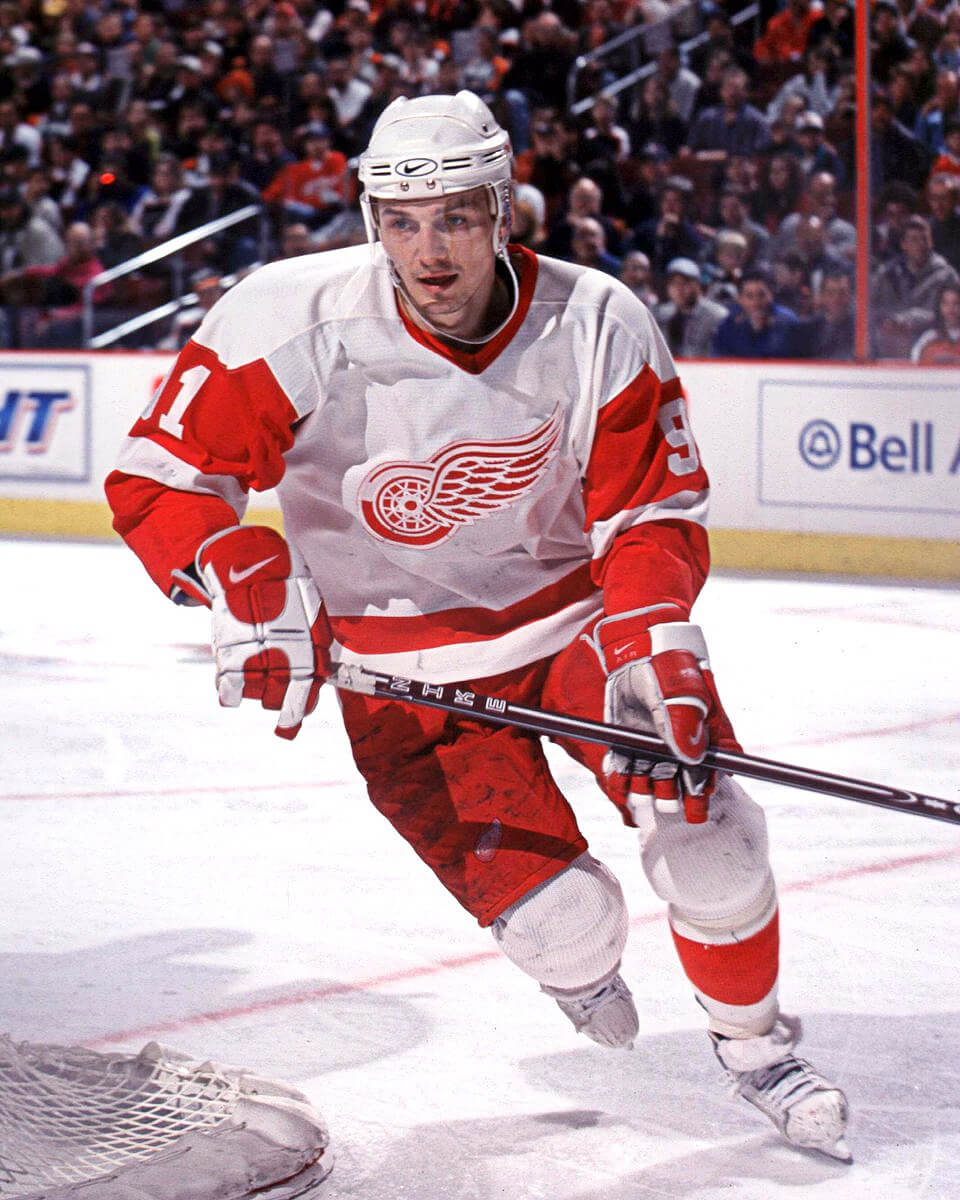 For real, in men's league, if a player comes out on the ice with ANY piece of white equipment -- a majority of the players on the ice -- on either team -- form an immediate opinion.

Talent, personality, yeah, none of that matters. That guy thinks he's something else.

But at the youth level, I want to think it's something completely different. You know, maybe it's hockey parents that didn't play hockey leading the charge.

Your son or daughter said they wanted white gear and you bought it for them.

On the other hand, of the ten or so players I've seen switch to white cages this season...well, yeah, I suppose I shouldn't be surprised. All but one fits the mold.

And here's the solid truth regarding white equipment, if Sergei Fedorov and Wayne Gretzky couldn't really pull it off, and they both tried, your kid can't pull it off either.

And Wayne Gretzky tried it all too... Blue holders, black holders, white skates, yeah, nothing stuck. Nothing. And he's the greatest player that ever lived!!!

It's really one of those, "just cause they make it in your size doesn't mean you should wear it" situations.

And, really, if there are memes making fun of it on reddit...that should be enough of a cue.

To this day, I still consider those the best looking skate EVER manufactured. 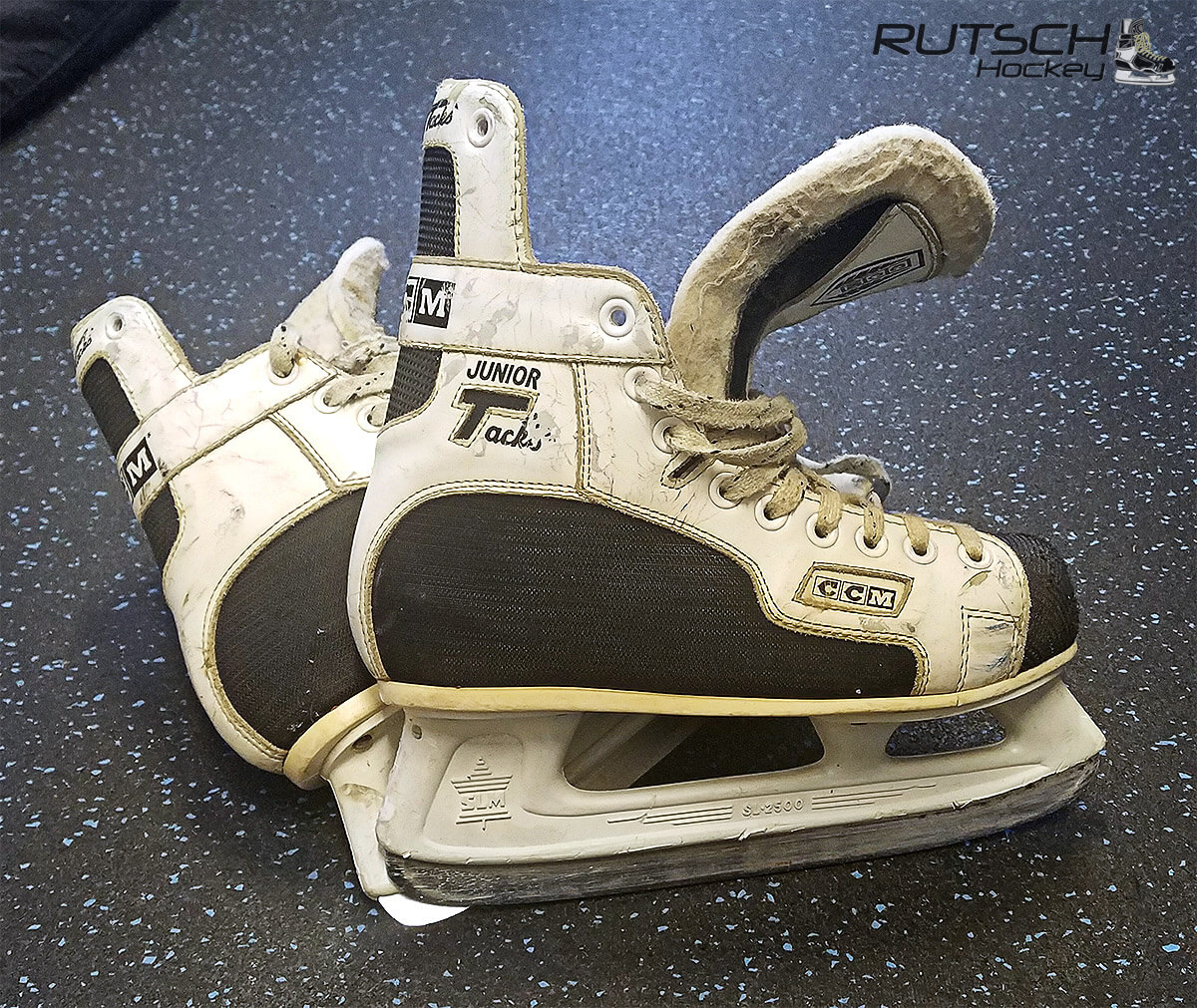 Look at those things! Beautiful.

That said, I can't tell you how many times I was told on the ice that I was wearing figure skates. It was...a lot.

I was ridiculed endlessly over those skates and you know what? I totally deserved it.

I only had white skates cause I WANTED to be different. I was fortunate to have parents with the income to overpay for a limited edition boot and I grew up in a town where, if you had nice stuff, you wanted people to notice. That was important to me. And, boy, did they ever notice!

Honestly, this is where the pompous d-bag stigma of white equipment originated. I was a diva. I wanted people to notice.

Look at me -- I have all of the best equipment. Ignore my inability on the ice. Please, and thank you.

I was just lucky to grow up in an environment where my d-baggery was minor league compared to the masses. Super fortunate to have figured it out the day I left that environment.

Even funnier though, today, I *still* wear white skates!

I have a pair of the limited edition Bauer Supreme One.9's that are totally white -- even the toe box -- and more usually wear a pair of white S15 Easton's with a custom holders and, hardly shockingly, a custom tongue too.

And you know what?

They still get called figure skates.

The best part of it all, though, is that I'm so terrible at hockey, I don't come across as someone that thinks they're better than anybody. I'm just the guy with the goofy looking skates and, guess what?

I'd bet that not one of those mite players mocking me will EVER wear white skates as a result. Just doing my part.

But a white cage or white gloves?

That's a line I will not cross.

And neither will my kids.

White skates, though, will always have a place in my heart. 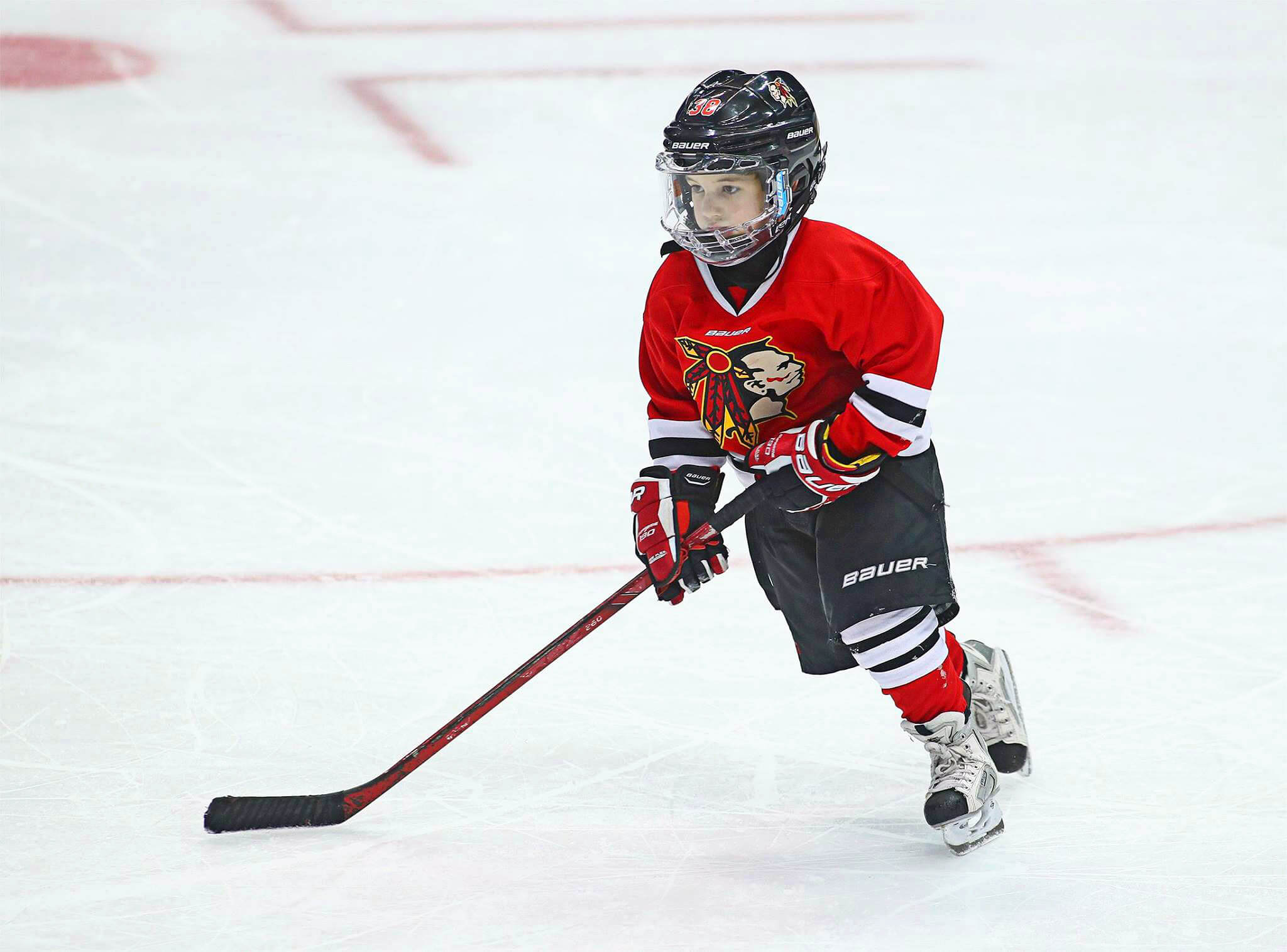 So, for two decades, I worked in professional hockey.

As such, I had a lot of opportunities to get out on the ice with the players. I didn't take advantage of those opportunities very often but when I did...the players noticed. 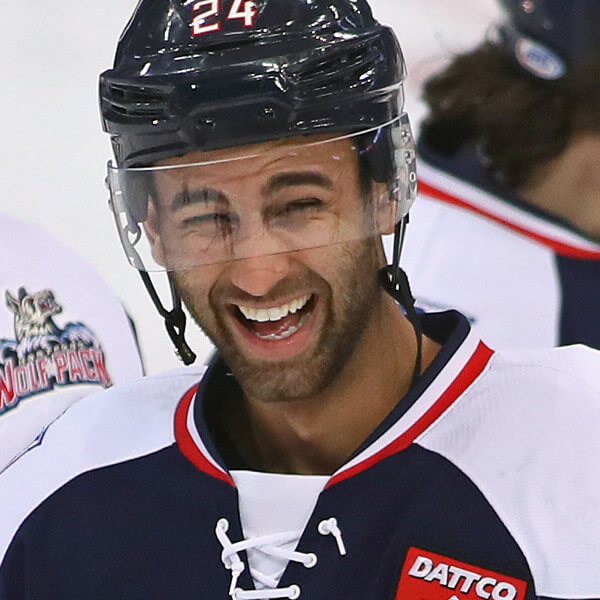 And then there'd be giggling, snickering, and all-out laughing... And do you know why?

It's because every single player in professional hockey still, to this day, laughs about that one kid on their team, as kids, that had white equipment and thought he was so awesome.

They weren't laughing with me. They were laughing at me.

No joke -- after 30+ years, the white equipment stigma is real.

Save your kids from being mocked...for decades.


Related Articles
» Curing the Hockey Bag Stank
» Getting more out of Hockey Practice
» COVID 19: No, hockey has not been unfairly targeted.
» Hot Take on Year Round Hockey
» Too Late to Start Hockey? Or too soon?
» Hill Training for Hockey Players
» Score More Goals!
» The Difference between Town Hockey and Elite Hockey