Not a goofy gimmick, you need one. 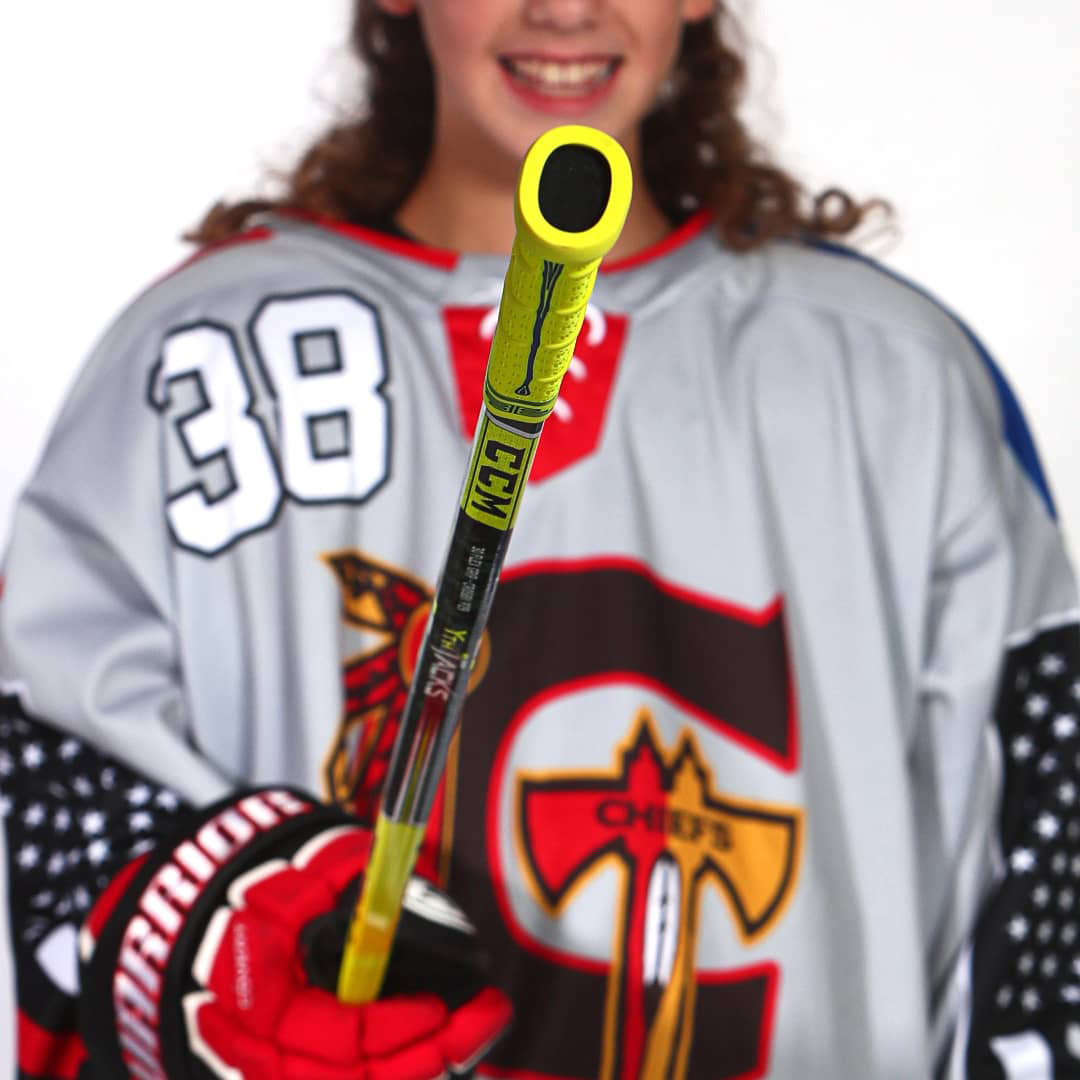 So, I've never been a fan of all the wacky contraptions you can put on a stick. We're a classic black or white tape family.

Maybe some team colour gauze tape on the top. Maybe.

We received a ButtEndz as a throw-in with another purchase back in 2015 or 2016 from Perani's Hockey World, I believe.

Didn't ask for it.

Like, I knew what they were but never really considered using one. It sat in its tube for YEARS in our equipment room, unused.

But, then, my kid noticed it sitting there and wanted to use it so, away we went.

It was such a pain to get on the first time. Like, you watch the YouTube videos of people slipping it on like a well worn sock but, the first time, it's a struggle. (It's even harder to get OFF the first time!)

Then, once I had it on, it was sliding all over the place. Expletives were uttered.

First game with it, it popped the plug off at the end of the stick. Popped it back on...and the ButtEndz promptly popped it right back off a few shifts later.

My son was freaking out due to that rumor that stick plugs need to be in, it's a penalty, blah, blah, blah... Some sort of urban myth about some kid getting their finger chopped off in three pieces or something after getting impaled. I don't know...

To date, like 700+ games in now, I've never once seen anyone check to see if the plug is in at the end of a stick and I haven't seen a stick go through anyone either...so, yeah...

An easy solution to this problem, if you care, is to tape the plug down first and then slide the ButtEndz grip into place. Makes it harder to get the grip on though. Don't say I didn't warn you! 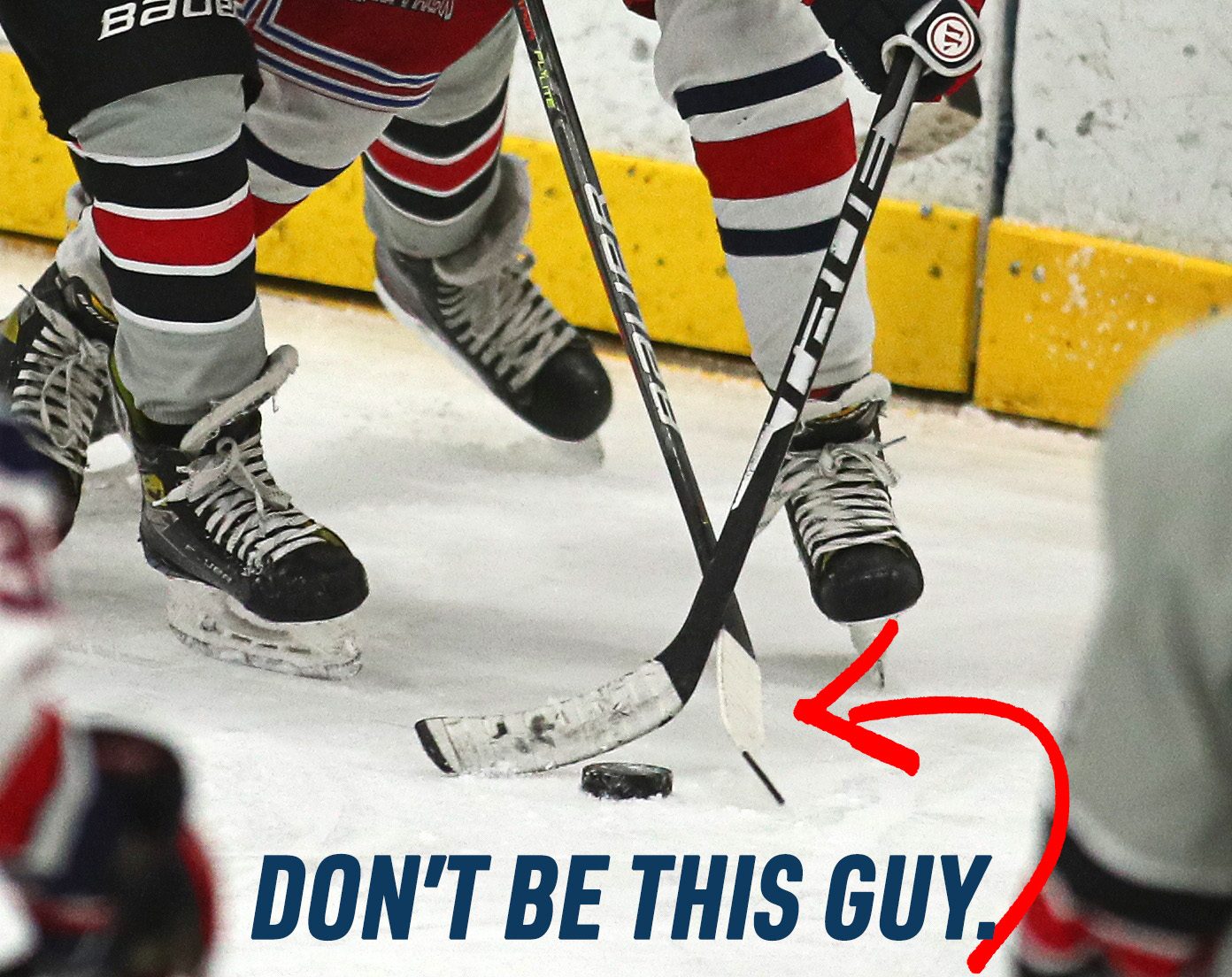 After about a month of use, the Buttendz started to look a little grubby. It was a white one, which had a lot to do with it, but, it certainly looked...used.

Now, that sort of thing doesn't bother me at all. It's better to look like you've played before, in my opinion.

Nothing goofier than seeing a kid without a single puck mark on his stick blade at the start of a game.

There's absolutely nothing cool about looking like you never touch the puck.

Here's the thing...since putting that first one on, I've purchased probably 15 more ButtEndz directly from the company. 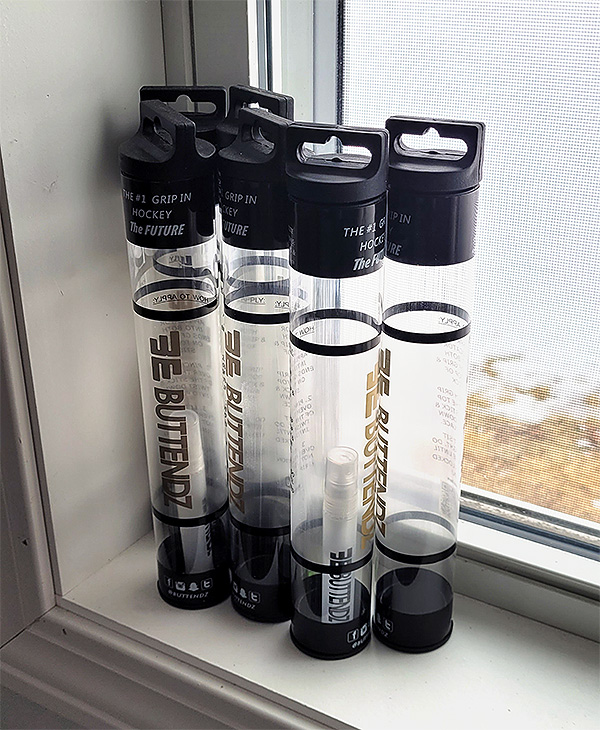 Truthfully, it's been our go-to for every single hockey birthday party my kids are invited to for the past 2 years. You invite my kid, you're getting a Buttendz Future grip. Guaranteed.

Based on the number of empty packaging tubes we have in our equipment room, we've kept six of them.

I just took a peek at our stick rack and, yep, all 6 are still in use and fully functional.

Tape jobs ever last that long? Absolutely not.

The original shows some wear -- a small tear here and there -- but it still works and it's been on 5 or 6 sticks now and is out there on the ice roughly 5 times per week. They hold up.

So, yeah, sure...paying $20-something bucks for a rubber tube might seem a little steep...but if you added up all the tape you'd have gone through over a 6-year period just for the knob of your stick, you'd be well beyond $20.

And, since I always measure my money in time, just think of how much time it takes and how gross your hands get trying to remove an old top-hand tape job.

For real, I was a skeptic at first...but these things are essential equipment, in my book.

And it gets even better...

Like, my kids used to wear through a pair of gloves in a single season. Top hand palm was toast, fingers hanging out exposed. New gloves, every season. 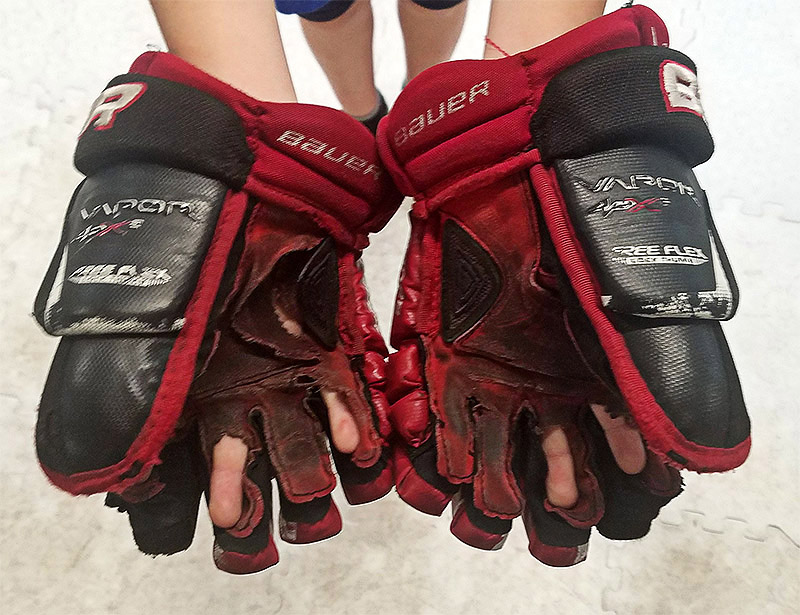 And it's not that we used the crazy rough friction tape up top previously -- just regular tape, a regular knob, and maybe some team coloured gauze tape I'd pick up off the road team's bench following AHL games.

But, yeah, the grip doesn't wear out gloves like tape does. It just doesn't. That's been our experience.

And they come varying colours too! Sure, that can be a vanity thing but, at our house, it also serves a purpose.

With 3 kids playing hockey, it's a struggle on it's own to get the right kid to the right building at the right time...7 days per week.

I've seen other families in similar situations show up for a game with...the wrong handed stick of a sibling.

And, better yet, they're reusable!

Broken stick? No problem! Just muscle the grip off and put it on the new twig. Boom -- feels like the exact same stick on day one.

Regarding getting the grip off of a stick, the method I use is to use the handle end of a spoon and pry it in-between the grip and the shaft of the stick, approaching from the top. Pry it away a bit and then pour some dish soap in there.

We use Dawn dish soap at our house but I'm sure Palmolive or Joy would work fine too. Do this on all four sides and try to push the soap down further down the inside of the grip using the spoon handle.

From there, start to spin the grip -- it'll let go and start to move and you can get it off.

Then, rinse most of the soap off -- and immediately put it on the new stick. I ran out of the spray the grips come with long ago, but a slightly soapy grip and some practice, and you can get the grip on as easily as they make it appear in the YouTube how-to videos.

Trust me -- 5 minute process for me now.

First run was a solid 45-minutes of frustration. It gets better, I swear.

Not a paid promotion here -- I've never received anything from Buttendz. You may have recognized my kids or some of the photos wearing the same uniforms my kids wear on some of their social media posts or even on their website but I can assure you, my kids aren't Brand Ambassadors on Instagram and I don't have a discount code to share.

Rob --the face of the brand -- said "Hi" once at a tournament in Rhode Island a couple of years ago but there wasn't any swag handed out. Just a quick hello with a head nod.

And, speaking of Rob, he was a professional hockey player.

I think a lot of people just assume he might have been...but he was! I'm old enough to remember him. Or maybe it's cause I was entrenched in the minors during his career? 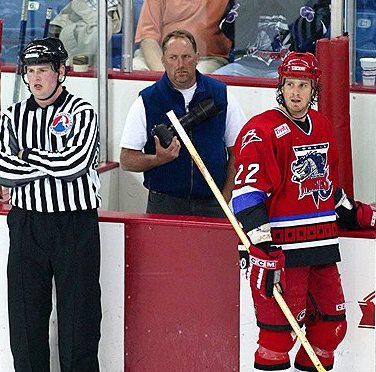 I was good friends with the late Ken Babbitt. He was primarily a professional baseball photographer...but he loved hockey. LOVED IT! As such, he was the team photographer for the AHL's Lowell Lock Monsters even though he didn't live anywhere even close to Lowell.

Anyway, he came down to my barn in Hartford and we shot a game, shoulder-to-shoulder. Neither of us worked "road" games very often but we'd hit it off the season prior one afternoon in Lowell and pretty much kept shooting in each other's buildings until the Lock Monsters turned into the Devils and, eventually, skipped town.

His "assignment" on one of those nights was get action shots of all the college kids signed to ATO's.

In the minor leagues, when a playoff spot has been locked down or is totally out of reach, the teams start bringing in players from the junior leagues and fresh out of college hockey for a handful of games.

Lowell was terrible that season so there was a revolving door to that locker room. I think they dressed over 64 different players, which is insane.

Also super stressful for a team photographer slated to get something of everyone...knowing, full well, that some of those guy may only appear in a single game and possibly only a handful of shifts too.

My assignment was much the same -- get editorial action photos of the guys fresh up from juniors or college so that, in the case they were signed over the off-season, there'd be a photo in New York Rangers colours to accompany the article and press release.

Or have that guy included in a card set! Upper Deck and ITG's requests were, often, off the wall.

Anyway, one of the targets that specific night was Rob Lalonde. He's the ButtEndz guy.

I only remember that cause I had a buddy growing up with the same name. No relation.

I went through my archives and I don't have a photo handy to accompany this article, unfortunately. That would have been really cool. For me, anyway. Dude played 7 games total for a defunct team 16 years ago? Yeah, I got him...

It would have been April 9 of 2006. It's probably stored on a CD that I don't have the hardware to read anymore.

So, yeah, if you've even been curious about the grips, just take the plunge.

Like, hockey equipment has changed so much over the years. The innovation and technology that goes into every piece of equipment is staggering and it's constantly improving.

Can you imagine that now?

It wasn't that long ago -- they were these button/clasp things like your chin strap...but on your shoulder pads.

So why are you still using tape for the top hand? It's not 1904 anymore.

Get a Buttendz grip. I know I say a lot of stupid things on here but trust me on this one.

You won't regret it.