Talk to People. Talk to Everyone. 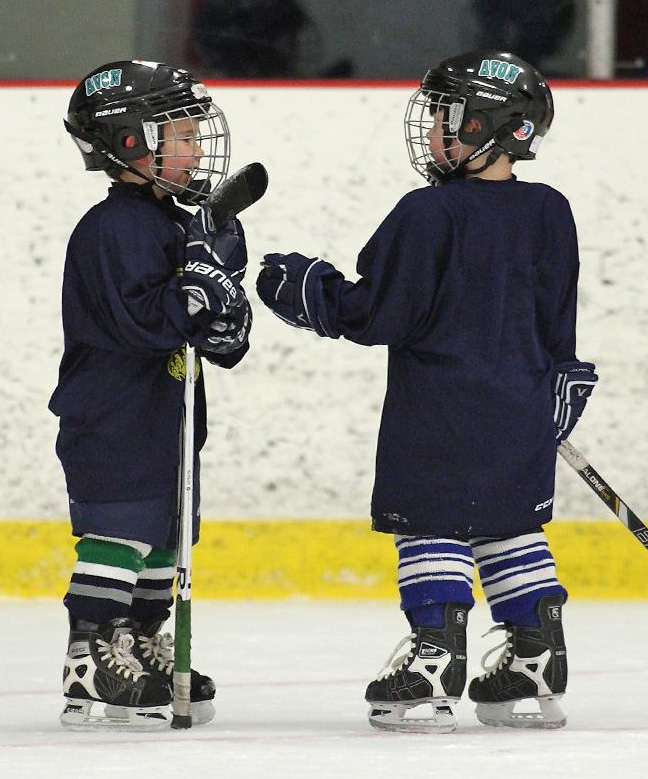 There's always that one family that, you know, you're casually aware of at another program just because you've been crossing paths with them for years and years at free clinics, tryouts, private lessons, public skate, and, well, just overlapping ice times.

You know their name.

They know your name.

You've crossed paths so many times that you even know what kind of car they drive...

But you've never really even acknowledged one another.

Dare I say it -- you almost don't even like each other.

It's like they're competition or something. Not like their kid could take your kid's spot on a roster but something different -- it's hard to explain.

And then, come one wacky off-season, you find yourselves within the same organization -- with kids on the same team -- and it gets all weird.

Awkward introduction out of the way... Phew!

So uncomfortable on both sides as, well, we've kinda sorta known (of) each other for half a dozen years now.

Ten minutes later, though -- holy crap -- you're just like me!

Okay, so truth be told, I haven't found myself in that exact situation... I learned from another more seasoned hockey parent right when we started that that's no way to go.

Thankful for that advice.

But, recently in a similar situation, I gave out an awkward "Hi" to a parent that I've been crossing paths with since, hmmm, 2015, probably.

At one point, our kids briefly shared a locker room and the same color jersey for a low level spring hockey team. 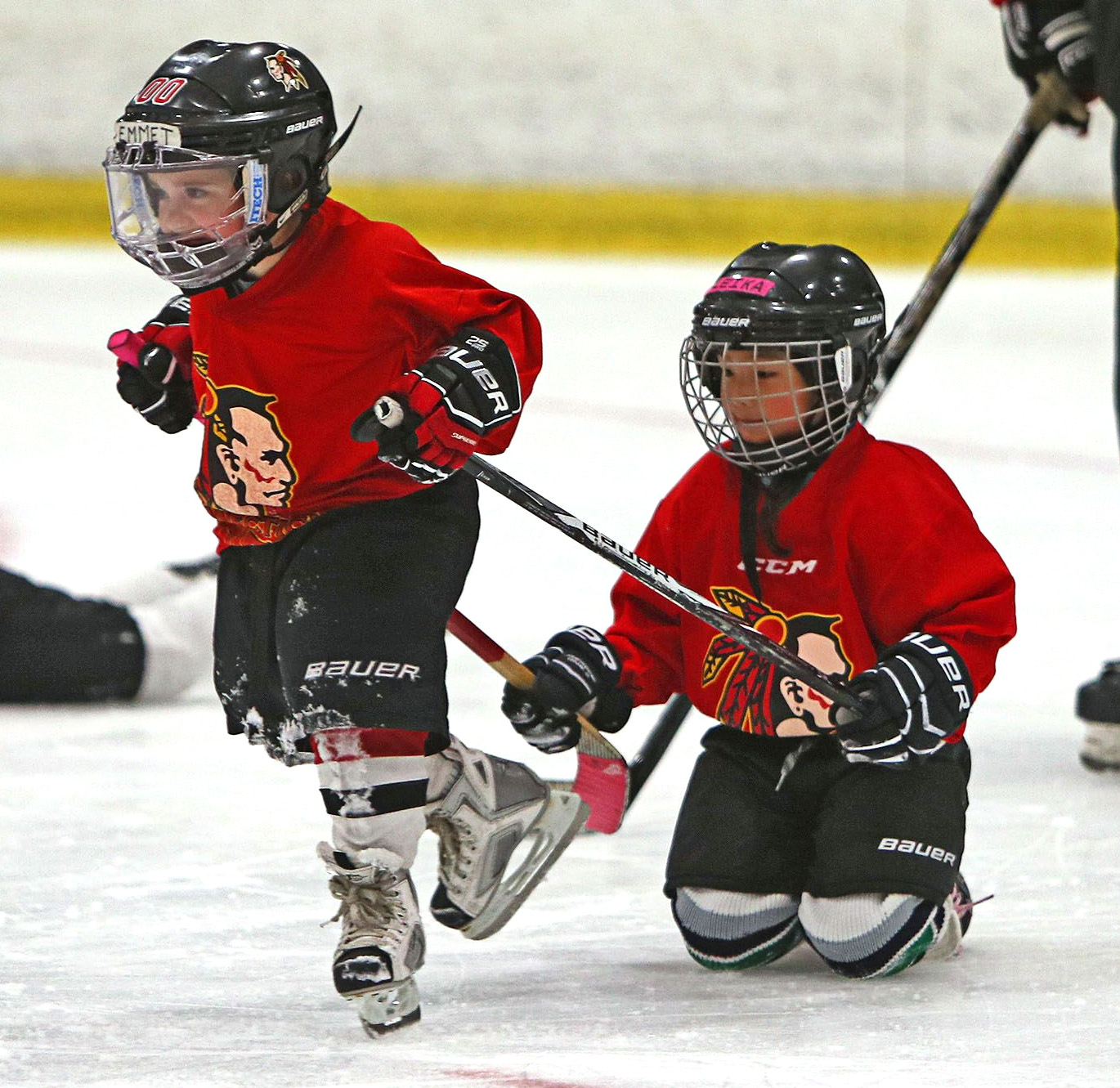 Outside of that, though, our kids' birth years don't overlap directly so we've never really played with or against them during the regular season -- but, even still, we'd cross paths probably 20 times per season.

Their youngest and my youngest were both taking part in the same learn to play program so I figured, now is the time.

We both have 3 kids.

We both started with the same program back when our oldest weren't even five years old.

We both now play for elite programs.

We both spend 4 nights a week in arenas.

We both drive all over the place every single weekend.

We both barely see our spouse -- cause it's essential that you divide and conquer to make it all work and get everyone to where they need to be...on time...in separate states.

We both have the exact same gripes with the theatrics of youth hockey.

And our circle of hockey acquaintances overlaps tenfold -- the long list of mutual friends on Facebook confirms it.

Point is -- we're exactly the same.

But outside of that, we're the same. 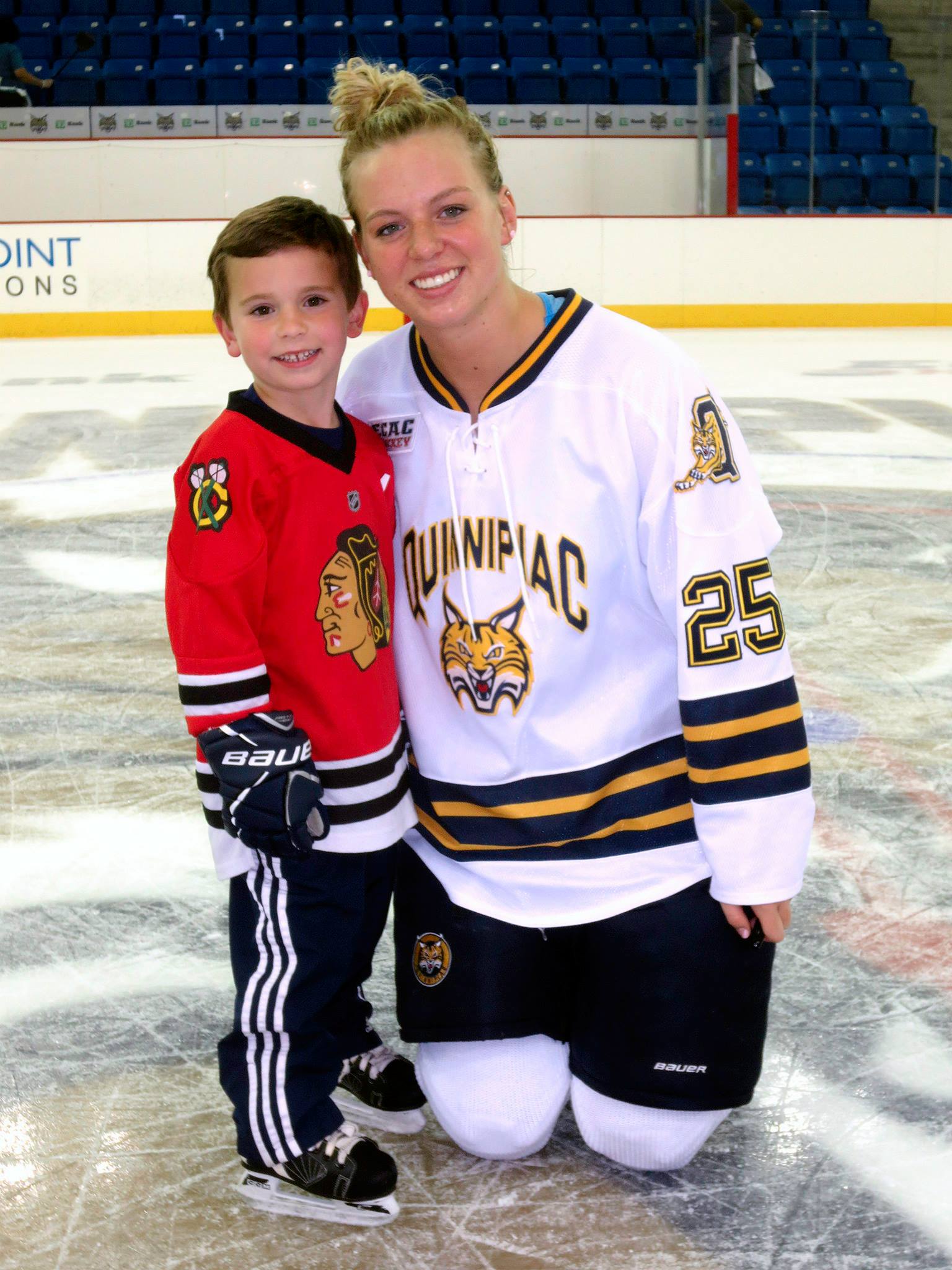 Within my own hockey circle, I've encountered parents that seemingly despise kids (or families) that are with rival or opposing programs.

It's like a Yankees / Red Sox thing -- the two sides can't find ANY common ground.

Kinda like the current political situation in the US.

Perhaps it's because I haven't lived within 8 hours of my beloved Maple Leafs since I was a toddler, and then my adopted team, the Hartford Whalers, skipped town 20+ years ago -- but somewhere along the way, I figured out that I just love hockey.

I mean, even while receiving a bi-weekly check from the NY Rangers for a couple decades, I still can't say that I was ever a die-hard Rangers fan. I like the Rangers more than the Bruins...but I think that's always been the case.

Fine... I'll still watch the Bruins if there isn't another game on. Maybe. Probably not.

I like women's college hockey. For real, every hockey fan should take in one of these games.

Legit, I could watch learn-to-play players shuffle around all day.

I even enjoy watching men's league.

Killing time at a rink is, I dunno, relaxing?

I've even been known to have a LiveBarn feed running, minimized, at work because I enjoy the ambient background noise of a rink.

In the past, during downtime between games at the "super rinks" that have like 10 ice surfaces, I'm often ribbed by teammate parents for seemingly "knowing" everybody as people coming and going toss passing greetings my way.

It's not true, of course.

I'm not popular and my kids aren't superstars that some might try to ride the coattails of.

But I do my best to make a friendly connection at every game against teams we've been facing every other year or so -- because I already know that I'll continue to cross paths with them over and over and over again...and in these rink lobbies, yeah, it's pretty common to see a familiar face pass by when your familiarity covers a span of 8 birth years.

I mean, just this past Fall, I received an email from a team from Albany -- 2 plus hours away and not in any of our leagues -- asking if my son's program was looking to fill empty dates.

I'm not a coach. I'm not a team manager. I'm certainly not a scheduler either -- but I am a contact.

I'd spent 10 minutes talking to a mom in Albany over a year ago. She remembered...and reached out.

Same deal with my youngest -- one of the coaches of a rival program within our State reached out after seeing a silly social media post of my youngest "playing" in his first ever game.

I bought some secondhand equipment from him, once, maybe 3 or 4 years ago. His oldest is the same age as my youngest and they were on the ice together for a couple months two years ago.

At that time, we just casually gave each other the nod, you know, acknowledging "Yep, I know you, what's up?" without actually saying anything.

Two plus years later, now, we're trying to potentially set up a competitive U6 hockey game between our two programs -- that many think are archrivals.

Truth be told, though, we're the same.

Sure, the programs our kids play for are competing for the same players in a relatively shallow pool -- but the players (and their families) are all so alike.

We all have so much in common.

No need to be ill-mannered towards one another and, honestly, it's generally a good idea to surround yourself with people that may have the totally opposite viewpoint you do. 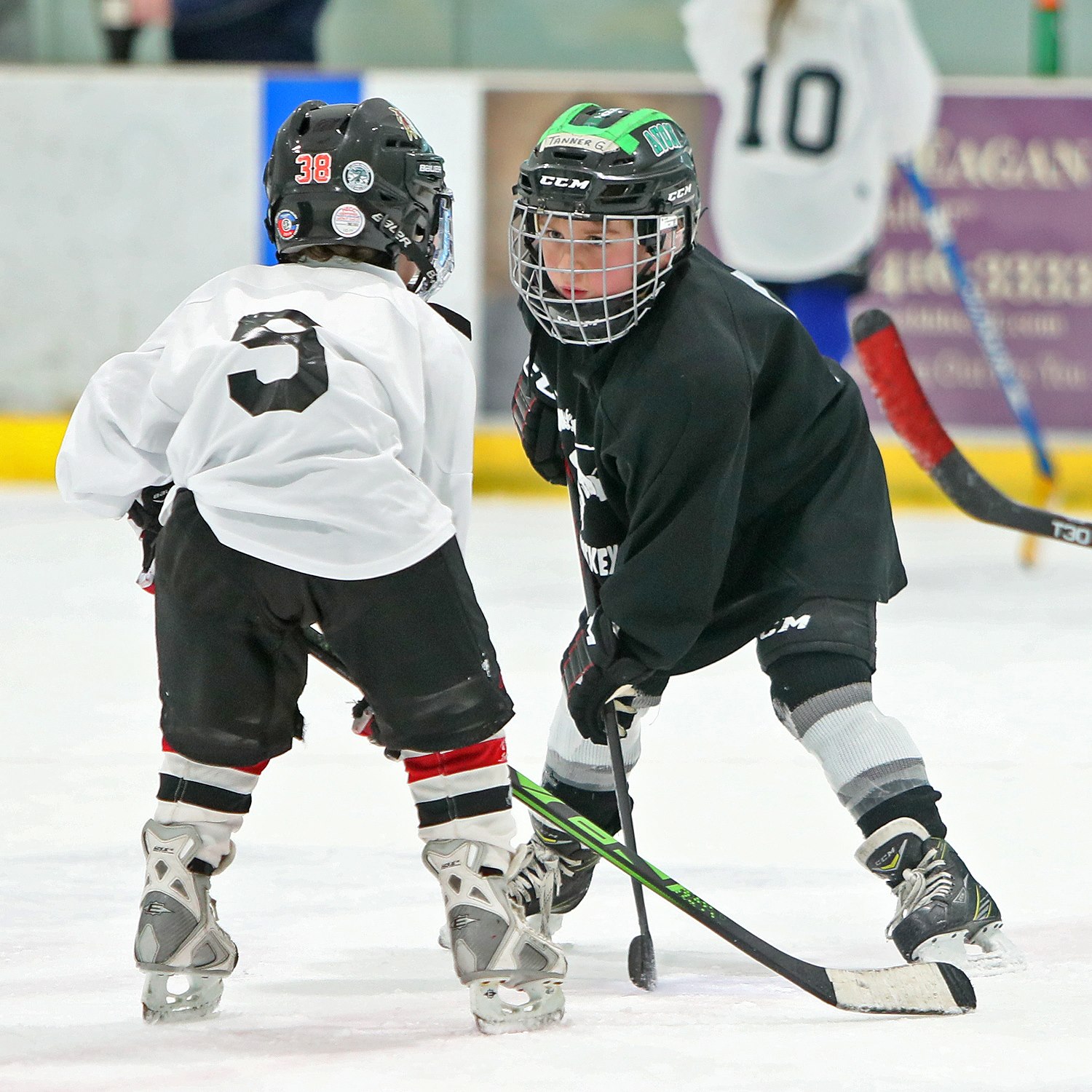 Encourage your kids to do the same -- talk to people!

Talk to the opponents before face offs.

Talk to different kids in the shared locker rooms for skills or clinics or whatever.

Or know their name.

Or tap gloves with them, unprompted, during joint ice sessions or even during ice switchovers.

I mean, even in the NHL, when a player gets traded or signs as a free agent with a new team -- every single player takes comfort in already knowing at least one guy in the new locker room. And it certainly helps if, you know, you kinda like that one guy too.

I could be the meanest parent in the world but I've made sure my oldest knows the name of every player on his youngest brother's team -- and says hi to them, by name, in passing at the rink or infrequent overlapping ice times.

But you know what's really neat?

As he's hanging out in a group with his team, as pre-teens tend to do, a 6-year old will walk by and say "Hi Duncan!".

Sure, his teammates will laugh or mock, "How do you know that kid?" but I know full well that those kids are just jealous cause I know they'd think it's awesome if a junior or pro player knew their name.

That street goes both ways.

He's figuring that out too -- I know he's embarassed but proud at the same time.

I'm proud too -- even with my youngest, just this past week a group of 8 year olds ran by him on their way to an off-ice workout and two or three of them said "Hi Emmet!"

Point is, grow that circle -- it's easy...even if you remain with the same team year-over-year.

Building on that... Be nice. Be kind. Be personable..

Some players are well known simply for a gimmick -- Henrik's hair comes to mind -- but so many others are known because they've figured out how easy it is to be a role model for younger or even just less skilled players.

There are professional players that my kids look up to simply because that player acknowledged them -- boosted their confidence or treated them as an equal.

There are youth players that learn-to-play kids look up to for the exact same reason. Not kidding.

To a kindergartener, getting acknowledgement from middle school aged kid is a big deal.

Jeez, in high school, I vividly remember how bad-ass I felt as a freshman on the track team when the seniors accepted me as a valuable team member and not just some random nobody 9th grader.

You can be a role model at 9 years old. You can.

Encourage your kids to pay less attention to the jersey everyone is wearing and more attention to the fact that everybody there is doing the same thing -- working to get better at a fun game.

Really, just be a good teammate...even if they're not on your team.

The moment you, or your player, go rogue and start just playing for yourself instead of the team (or the game), it all falls apart really quickly.

It sounds hokey, but it's true.


Related Articles
» Roller Hockey for an Ice Hockey Player
» Going Bar Down -- Help with Lifting the Puck
» The Difference between Town Hockey and Elite Hockey
» The Right, errr, Wrong Curve
» Hot Take on Year Round Hockey
» The Right Coach; the Right Attitude
» Ebb and Flow of Hockey
» Is Sportsmanship in Youth Hockey still a thing?