Teaching the Little Ones to Skate

Truth be told, I had all of my boys on the ice way too early.

Duncan was almost 3 when he started and Henrik and Emmet weren't even 2 years old when they first started.

I suppose part of that is due to the fact that we were at the rink anyway for the younger ones but it's also cause I was way too eager to get them started.

Kids under 2 years old aren't really picking anything up.

I mean, if they're willing, yeah, totally, go for it...but don't force them out there and expect results.

Honestly, even 3 years old is pushing it. I mean, my kids could skate at that age but if might have been better to have waited even just a little bit longer.

Emmet, now four and a half, is finally capable enough to skate out on the ice for public skate without an adult hovering over him. He can move around and get back up on his feet without any assistance. That's huge...but it didn't get to that point until he was four.

Looking back, and even looking at the present strides of my kids, you can plainly see that I taught each one differently. 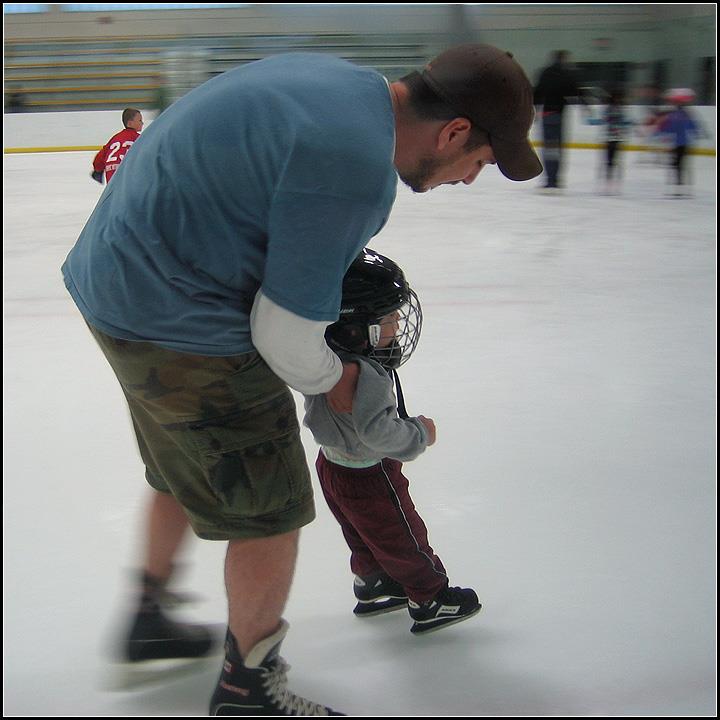 Duncan, my oldest, was the first person I ever taught to skate.

As such, I made some mistakes that still hurt him to this day.

First off, I spent far too much time skating him around while holding him by the elbows just to get him going. My own impatience to blame.

Following that, I had him "walking" on his skates on the ice -- you've seen it.

Tons of learn to skate classes start with this method...but good ones abandon it by session two.

My big mistake was that I over emphasized stablilty.

It's hard to explain, really, how he was stable but not balanced.

Skating, in itself, requires a very unnatural movement.

It might look like walking...but it's not. You don't step forward to go forward, instead, you push back.

It's all about balance and shifting your weight in perfect sequence.

Yeah, two things you just can't explain to a toddler. Or adult, frankly.

So, he walk-skated around so afraid to fall that, to this day, he's often far too upright when he skates and doesn't extend his stride fully. Further, when he does go down, he's slow to get back on his feet.

The inability to get back up quickly was a HUGE problem all the way into squirts. Like, he was still that kid getting on all fours just to get back up and, at the level he plays, that was a big issue.

My failing is that I didn't let him fall down and get back up thousands upon thousands of times as a toddler.

In the rare case he did fall down during those days, I'd watch him struggle like an upside down turtle and then, frustrated, cave in and help him up. 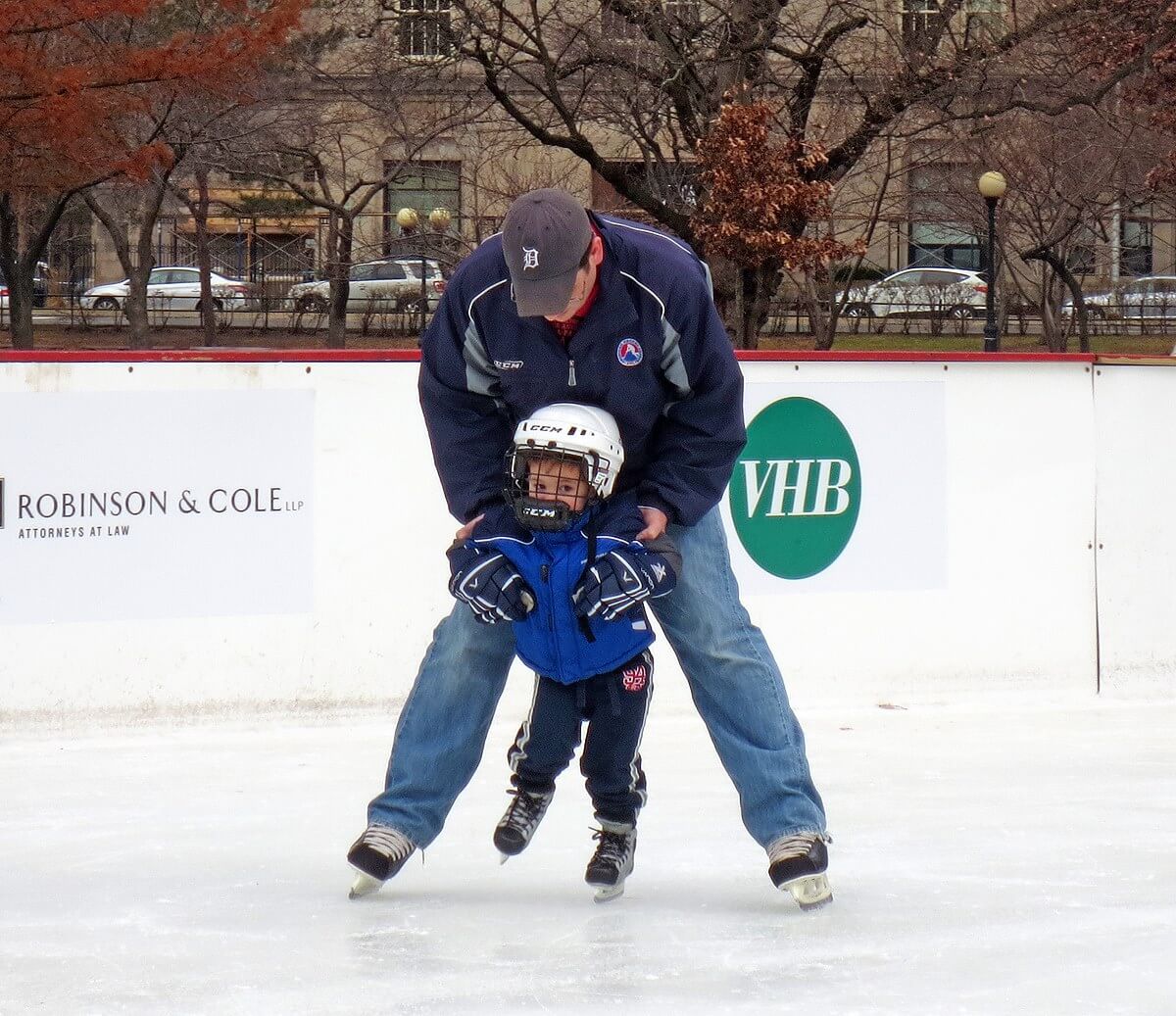 With my middle son, Henrik, I made some of the same mistakes.

I can vividly recall how much it hurt my back to skate him around the rink. Just seeing that picture makes me all tight...

And he was so young that a lot of the instruction I provided fell on deaf ears.

Again, I started him off by teaching him to "walk" on the ice but just trying to keep up with his brother, he quickly progressed into a more proper skating motion on his own.

Sometimes, though, it's just dumb luck.

Unlike his older brother, Henrik bends his knees and stays low.

To this day, when he gets moving, he's like a runaway freight train. Fast, fast, fast...but unstable.

It's a common occurance that he'll just drop like a ton of bricks for no apparent reason -- usually leaning too far forward or taking a turn so tightly that there's no way someone his weight is going to get the skate blade to bite the ice.

If I could merge Duncan's stability with Henrik's stride, I might really have something to work with...

The one big change in my teaching technique with him was that I pretty much never helped him get back up on his feet. Not once.

As a result, he's always been quick to get back up..which comes in pretty handy when you tend to fall down for no apparent reason. 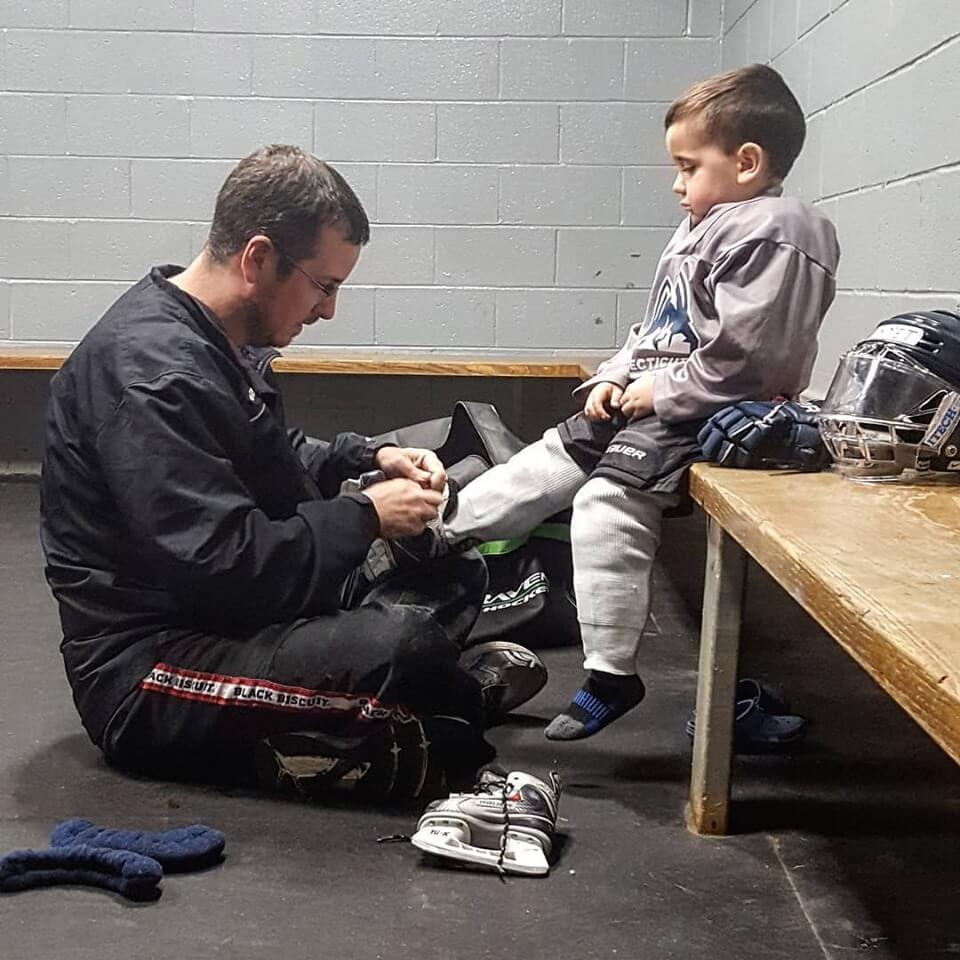 With my youngest, Emmet, I've taken an even different route.

Sure, he was on the ice before he was two years old too...but I didn't get real serious with the skating (in instruction or frequency) until he was well over 4 years old.

Part of the reasoning there was that I just didn't have the time to teach him to skate with the other two's hockey schedules gumming up the calendar...but it turned out to be a blessing.

First off, at four, he's old enough to take some instruction. That's so important -- I realize that now.

He's also less of a wildcard -- we haven't had one of those sessions where he's just done, punched out, after less than 5 minutes.

Following what I'd learned with Henrik, I've probably helped Emmet back up on his skates fewer than 10 times ever. Falling down and getting back up quickly are in his wheelhouse.

The one thing I'd added to my technique is that I encourage him to go fast...all the time. Always.

Duncan is a slow skater because he's always been concerned with stability.

Henrik isn't as explosive as he could be because, well, speed was never encouraged until he'd already developed his individual stride.

It took 7 hours on-ice, over 3 weeks, to get him from a "walker" that was often on his back to a kid that can actually do something that resembles skating all the way around the rink, in control, without falling.

Overall, I think I had it pretty easy when teaching them to skate.

But there are a couple other things I often notice hindering new skaters during public skate sessions that I was lucky to never have had to deal with firsthand.

First, is the the appearance of weak ankles.

A derogatory term that hockey players frequently use to refer to poor skaters is "bender". A "bender" is a skater who's ankles bend inward so they're always skating on their inside edges.

Look, I get it, when you walk around in shoes what are a few inches wide every single day, it's a pretty rough transition to stand on a few millimeters of metal...while on ice.

Totally get it. Skating feels weird. Skating is hard.

But the ankle bend -- if you're not lacing up super expensive professional figure skates -- is 100% due to the fact that the skates aren't tied tight enough.

You're not supposed to lace them up like high top sneakers that you wear more for style than, say, basketball.

Lace them tight -- all the way to the top.

That will lock your ankles in place -- the skate boots are rigid for a reason -- and will ensure that the skate blade is darn near perpendicular to the ice.

It's a lot easier to skate when your knees aren't knocking into one another.

The other thing I see all the time is a tendancy to clutch the boards for dear life. You see adults doing it all the time.

I've always told my kids that the boards are lava. Don't touch them.

That terminology works for the under-four crowd... but probably not anyone else.

Again, I understand why I see adults clinging to the wall during public skate. It's the only stable thing out there are far as they're concerned...but skating is all about balance.

Until that's realized, skating will forever be a difficult task.

If you're twisting your body all weird to get both hands on the tiny ledge of the dasher, well, I'd argue that you're already off balance even if you weren't on thin metal blades. Or on ice, for that matter.

Clutching the wall with a single hand isn't as bad...but still throws off your balance.

Same goes for holding hands...I see that all the time with couples where one is a relatively solid skater and the other probably hasn't worn ice skates more than twice...ever.

My youngest still reaches out to hold hands from time to time and, while it's super tempting, it throws the skating motion off and makes it really hard to get better at.

Throw that weight around evenly and you'll be skating proficiently in no time. Hands and walls just throw it all off.

And lastly, from my own experience, try to ensure that your new skaters don't develop a more dominant side. If they just push with one side, like they're riding a scooter or skateboard, try to break that ASAP.

If they're great turning in one direction but not the other, try to break that.

If they can do a hockey stop facing one direction but not the other, practice it.

I'm much MUCH stronger to one side -- totally jealous of how my kids aren't like me.

I often joke that I'm a victim of public skate where, so often, they just have you go counter-clockwise but it's not a joke -- that's the only explanation I have for why I am so much smoother with EVERYTHING turning towards the left.

With Emmet, at public skate, anytime it's not too crowded, we take over a corner and skate against the flow in an attempt to prevent a preferred or more comfortable direction.

At hockey practices and learn-to-play sessions, good coaches will ensure that drills are run in both directions and, honestly, more to the more common weak side.

It's shocking how many youth hockey players lack the ability to stop in both directions...and all it takes is a ton of practice early on.

So, here are my tips for helping a new hockey player get going on skates: 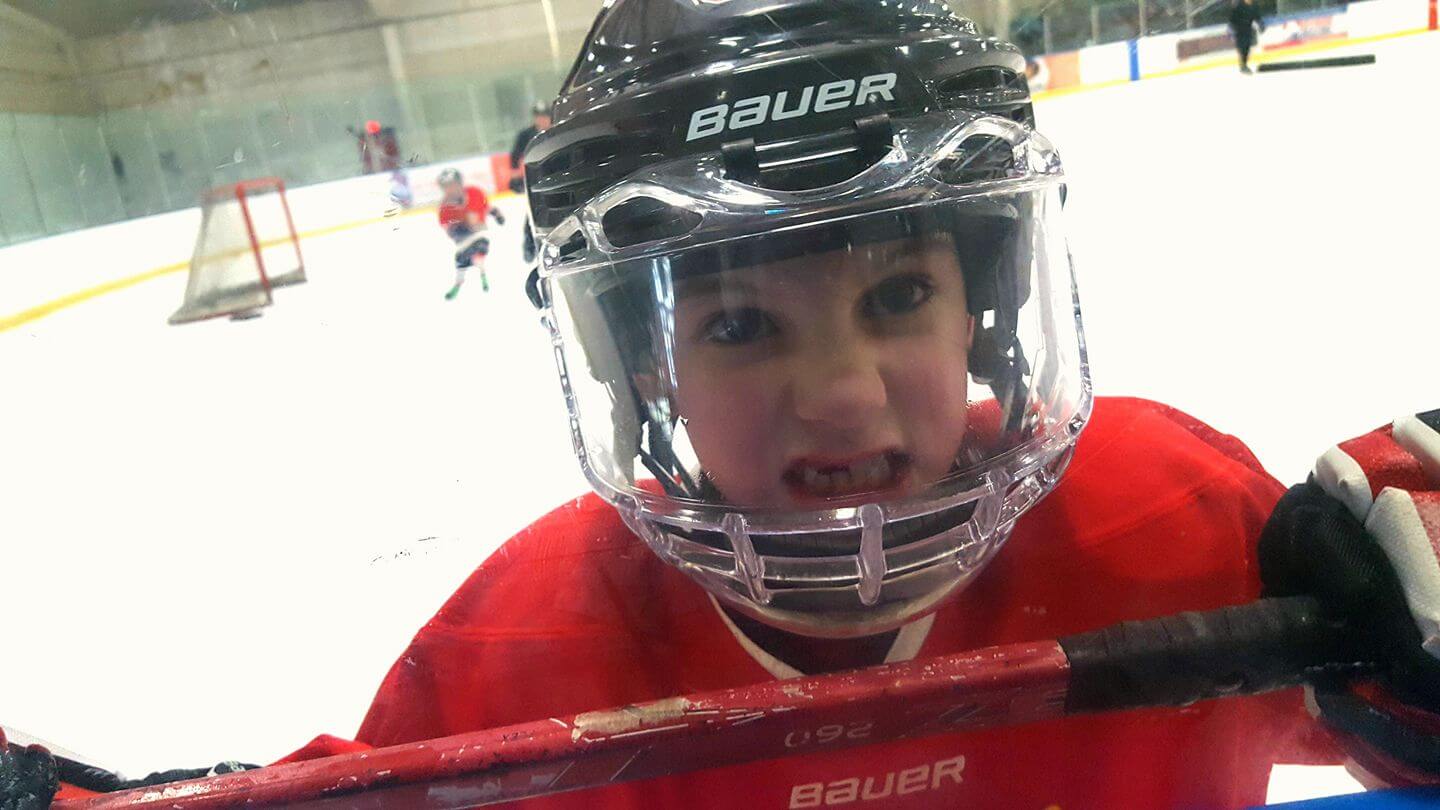