Last week, one of my son's teams played a road game and as I was waiting for his team to emerge from the locker room, post-game, I noticed a familiar site occurring in the lobby area.

It was the sign-in table for a Brick team call-back skate.

I saw the anxious kids and the proud, yet anxious too, dads (mostly) carrying their kid's gear in a steady stream towards the table where they'd be handed jerseys for second or possibly even a third evaluation skate.

As someone that can talk all day about youth hockey, it was really hard to just bite the insides of my cheeks and smile at them...but not feed them an ounce of advice. Or warning.

It's kinda like when you're expecting your first child -- you don't really care to hear about anyone else's experiences. If anything, it's annoying... I get it.

And so, ashamedly, I just kept biting the insides of my cheeks thinking, "Oh, if they only knew what a mistake they're making..."

That isn't to say that the Brick Tournament teams aren't great.

My son didn't go to the Brick. Truth be told, he didn't even tryout his actual Brick year as a 10 year old.

But I was once one of those dads standing proudly in line waiting to check in for a call-back skate. I was.

Damn, was I ever green... It's almost embarrassing...

What I've learned since those days is that, well, first of all, the Brick Tournament -- and the Brick Series tournaments aren't really "all that".

Their rosters aren't "all that" either.

In a nut shell, they're really good hockey players playing a really terrible style of hockey.

In fact, every player/family we've had as a teammate that has played for a Brick team falls into one of two categories -- they've either had their ego go to another level and suddenly consider any non-Brick youth hockey experience far below them OR they've totally regretted the experience and related expenses. 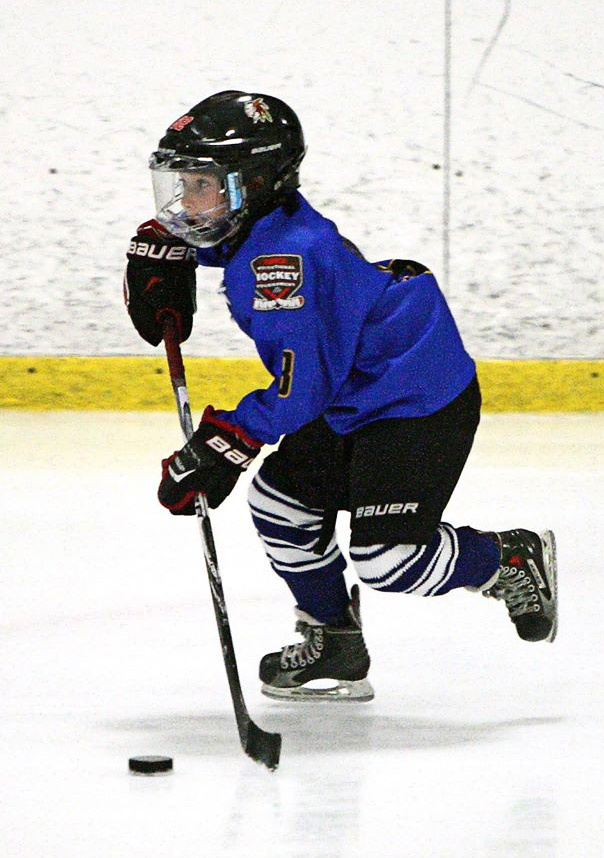 There isn't much middle ground to be had. Not that I've encountered.

It's not all bad though.

Their jerseys are way cool. Anyone need a #3 RUTSCH jersey, shell, and socks from a few years ago?

I've got helmet stickers and warm-ups too!

Those that do get their foot in the door early, like these 6 and 7 year old prospects in line, and drink the kool-aid are so often blindsided when their 10-year old season comes around and they're cut.

I mean, you've been proudly calling yourself a super star for years now...

It's a tough exercise to swallow your pride after having that long believing you were better than everyone else only to realize that you're not actually as advanced as you thought you were...and you lost your spot on the team to a kid that you've never even seen at a tryout...from 300 miles away.

I do wish the best of luck to each person in that line but the truth is, it might work out great for one of those kids. One.

Don't get caught up in the hype.

Don't let it go to your head.

Your kid is in elementary school.

Get better instead -- don't worry about a single summer of tournaments all over the place.

Best all-around hockey player I know that's my son's age was someone we actually met on a Brick team together at one of their pre-tournament training camps.

Neither of our kids actually dressed for a real game for them...and neither of us even tried out after that first year.

Some are just dazzled by the marketing -- which is quite hilarious, actually, when you peel back a few layers...

Every Canadian knows that the Brick is a furniture store chain.

There's nothing cool about sofas and end tables or zero percent financing. Nothing.

Would you strut around proclaiming that you're playing in the Raymour & Flanigan tournament this summer? Or brag about making the Ethan Allen team? Check out the La-Z-Boy reclining chair patch on my jersey! Bob's Discount Furniture, anyone?

And the "real" tournament, the one that "matters" is in Edmonton.

I've been to Edmonton a bunch of times.

I've been to that mall too. Like, legit, there's a skating rink in the hallway of the mall.

Didn't people make fun of the Hartford Whalers because their home arena was connected to a shopping mall?

They did. It's true. Not fake news.

So...it's a hockey tournament sponsored by a furniture store in a shopping mall in an isolated and, frankly, drab city in Alberta.

Google map it. Edmonton sucks. I have family that live there.

Even NHL players don't want to go there -- why do parents of 10 year old hockey players?

So, anyway, this player we're friendly with will undoubtedly play at the Quebec International PeeWee Tournament in a couple years. He'll likely play NCAA Division I too. I'd bet a QMJHL team even blows a draft pick on him in a few years. He's that good.

And they figured it out -- the Brick Tournament teams that he was merely an alternate for weren't a pathway to success.

They're 'pretend' allstar teams for parents with disposable income.

Yes, their rosters are filled with really good hockey players...but they're far from collections of the best of the best.

Those parents in line the other night...they'll figure it out sooner or later.

There are countless paths to choose from and I chose to turn away from the Brick Series. I don't regret it.

The three most skilled players my oldest son has ever been teammates with have concurrently followed the same path I've followed. We chose different Brick teams -- 3 separate programs -- but the results were identical after we'd seen firsthand what was behind the curtain -- none of us returned.

We laugh about it now. None of the three families went back -- for younger siblings, even -- and a couple of the players are legitimately among the best of the best at their birth year.

In subsequent years, we've even declined the "night before" invitations to suit up for the Brick Series teams we didn't even tryout for.

So, yeah, I'm not bitter. I'm actually more ashamed that I fell for it as little as I did.

I cannot stress enough how much every single hockey parent can learn from other parents that have older children.

For my son's Brick year, he played on a tournament team that played closer to home against 12 year olds instead.

Got his ass handed to him. And came out a more humble player.

A better one too.

I know we made the right decision.