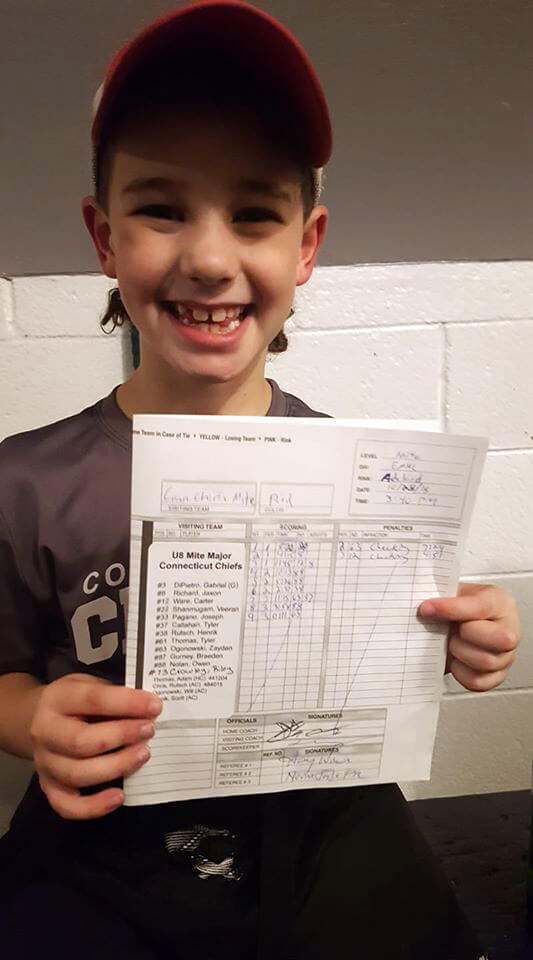 Every team has that trio of forwards boasting loudly about their 70+ points at the mid-point of the season and how they're shooting for 200+, completely unaware that many of the kids on the team are in single digits...if they have any points at all.

Last season, for one of my kid's teams, it was pure comedy as one player continually felt the need to keep EVERYONE up to date on his current point total... Great job, dude!

I always found it a little peculiar how his "total", to even be feasible, would require averaging 6 points per game when our entire team was only scoring maybe 3 goals total per game, but, yeah...some kids just aren't great with math...

Joking aside, though, while it was inadvertently crushing the spirits of some of his teammates that struggle offensively, and causing others to just roll their eyes at the bloviation, I loved his confidence.

Served him well too.

For a game last week, I credited my son with an assist on this website that wasn't on the score sheet.

The goal, on the "official" league game sheet, was listed as...un-assisted.

As a parent of a defenseman who's on pace to have fewer than 10 points total this season, stuff like that -- not getting credit for obvious assists -- used to aggravate me.

Referees at the youth level see different teams and players with each passing hour. They can't possibly be expected to keep track of primary assists, let alone, secondary assists!

I mean, how often have you seen a referee skate into, and join, a goal celebration and ASK the kids who scored? You see it all the time.

I've even seen -- and signed -- countless game sheets with goals, breakaway goals even, attributed to jersey numbers that aren't even on the bench.

They've got a hard job -- you can't fault them for not knowing which kid scored cause, hey, I'll just say it -- most of the kids look the same when they're in uniform.

But, to the kids, the points do matter and, like every parent, I watch what my own kid is doing on the ice a lot more closely than any other player.

Guilty -- my favorite player is the one that lives at my house.

I know when he assists on a goal...and I make sure to give him credit where credit is due.

What do you think?

Duncan is the defenseman in black, #82, that creates the turnover in the neutral zone and shovels the puck forward to the goal scorer.

I vote yes, obviously...but, with confidence being such an important part of the game at the youth levels, I think it's *super* important to give the kids credit for the offense they create even if it doesn't make it on to the official score sheet.

I mean, even in the NHL, I only support the awarding of a secondary assist if it's a real slick tic-tac-toe play involving 3 players...and no rebounds.

To date, some 400 youth games in, I've yet to see a secondary assist worthy of mention at any of my sons' games. Not one.

And really, I don't support keeping a log of stats for youth players. I'm not sure any experienced hockey parent would. It's silly.

I mean, obviously, it's an inexact science with a ton of subjectivity (when it comes to assists) and totally inaccurate. Not to mention, totally meaningless too.

There isn't a record book for 10-year olds' individual stats... Thank god too. Can you imagine the drama that would cause? MyHockeyRankings is bad enough.

I only do it, as accurately as I can, cause I know it will never be my kid bragging about having more points than the entire team has scored.

That's not their nature.

And, frankly, they're not that good at hockey either!

But, yeah, especially if your child plays defense and/or points are few and far between, absolutely laud praise on them after a game where they've contributed to a scoring play.

Reality of it is that defensemen not named Brent Burns, Paul Coffey, or Bobby Orr typically don't score many goals -- and, really, not one of those guys actually plays (or played) their named position -- DEFENSE -- very well.

A blueliner's main role on a traditional offensive flow chart is to kick-start the attack with the initial breakout passes which, you know, severely limits their involvement in scoring plays to the aforementioned secondary assist....if the ref even caught which player started the breakout.

Oh, yeah, they never catch that.

As a hockey parent -- that's your job.


Related Articles
» A Simple Piece of Advice: Be Nice!
» Is Elite Hockey Cost Prohibitive?
» Good at Hockey? You sure?
» What does it mean to be coachable? And why it's so important.
» Product Review: SISU Mouthguard for Hockey
» Bobby Orr is Wrong
» The December Doubts
» COVID 19: No, hockey has not been unfairly targeted.