When to re-tape a Hockey Stick 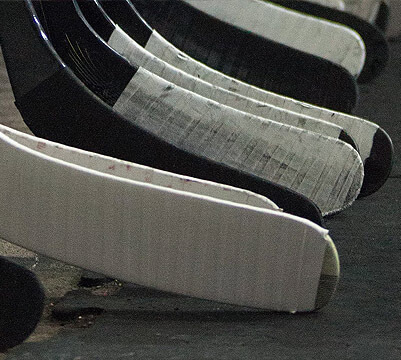 There's always that one parent you see re-taping their child's stick before or after every single practice or game, busting out the wax, and using a lighter to get it to melt into the tape.

I have two things to say to that.

And, two, unless you own stock in the tape company, you should probably stop.

Next time you're at the rink and there's a men's league game going on, sit down and watch for a little while.

Yes, you'll see a lot of guys out there with tinted visors, pro level skate models not yet released to the public, and $300 sticks with freshly taped blades.

But what you'll also see is some middle aged guy, wearing 20+ year old CCM Tacks and using a wood stick with a 3-4 month old tape job, split the defence and deke the goaltender out of his pads.

Unless you're at the absolute top of your game and getting paid to play, the equipment (and the equipment you put on your equipment) is such a tiny part of your overall performance level.

By all means, replace the tape as often (or as rarely) as you like.

Add wax to the process too, if you desire.

But, realistically, a new tape job is only really necessary when the tape at the bottom is beginning to wear off. Protect your stick.

As for the top of the stick, my kids outgrow their sticks long before I'd ever need to re-tape that end.

Sometimes, though, we'll re-tape the top in a new colour. Kids like stuff like that and, honestly, little things like that can add a little spark to their game.

So, really, it's just a matter of personal preference.

I play with a guy who loves the look of a freshly taped blade and always makes sure that it overlaps in perfect parallel lines. He literally spends 15 minutes before each game taping two sticks and goes through more tape in a season than I have in a life time.

With his brand spanking new tape job each game, I think he looks like someone who's never played the game before.

When I tape a stick, I kinda sorta keep the lines parallel too but don't worry about it too much if things go awry. I then slide a puck against the seams repeatedly to flatten things out...and mark up the tape, you know, so as *not* to look like someone who's never played the game.

Regarding stick wax, I'd never once used it until it came as a freebie with some other equipment I'd purchased.

I'll be honest, I didn't notice a difference.

Related Articles
» Hockey Skills, Hockey Drills, and Hockey Tricks
» Rutsch. How should I pronounce that?
» Dirty Players: Can we stop with all the Slashing?
» Play Without the Puck
» A Simple Piece of Advice: Be Nice!
» The Proper Way to Tape a Hockey Stick
» Responsibility of Referees in Youth Hockey
» Let's talk about Hockey Skate Laces