Shot Selection is the Secret to Scoring More

My oldest son's last game a squirt came and went and just a few days later, the kids were all back out on the ice for tryouts.

But something was different.

Kids were now taking slap shots. All of them.

And it was horrible!

Four feet high or six feet wide, resulting in a loud bang (or not so loud bang) as puck after puck hit the back boards.

At least they were consistent.

I'm sure this happens with every new crop of peewee hockey players but this was my first time witnessing it. 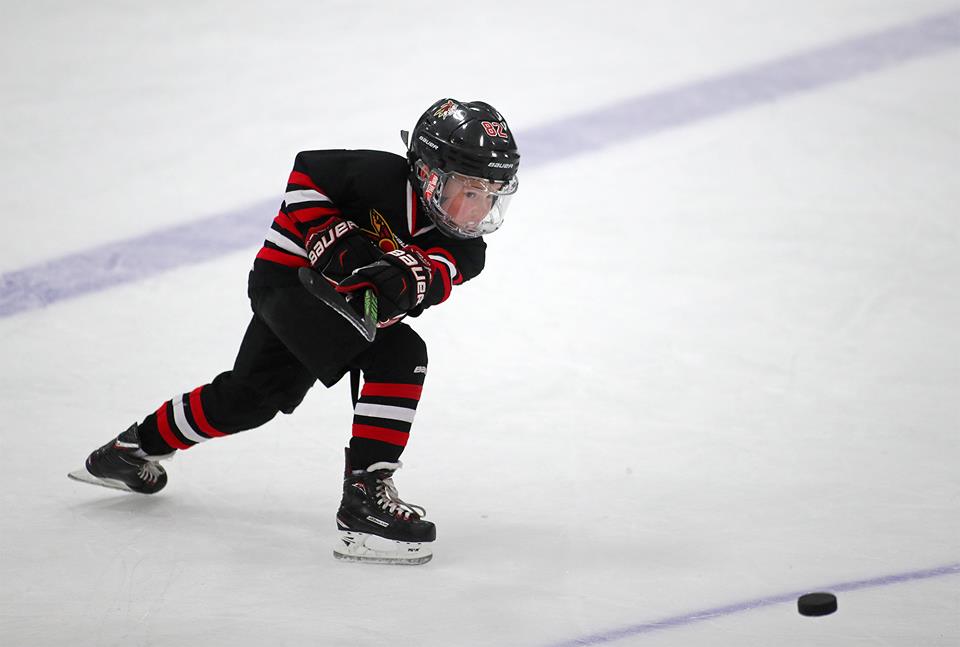 As you'd expect, I have some opinions on the subject.

First and foremost, power is nothing without accuracy.

If you can't hit the net consistently with your slap shot, you shouldn't be taking them.

There's a reason you rarely see slap shot goals -- first, they take too long to get off, second, none of the kids are doing them correctly, and, most importantly, they're almost never on target -- even when done properly.

A shot that misses the net is as effective as a shot you never get off.

So, really, in ice hockey there are just 4 kinds of shots.

You've heard this all before, I'm sure, but I find that a lot of hockey fans and parents don't really think about the "why" aspect very often.

Like, why would anyone ever take a wrist shot when a slap shot has more power?

Accuracy -- I already mentioned that. That's the answer.

Well, where does the backhand come in? Why would anyone take a backhand shot?

And here's where people kinda punch out...

For a smart hockey player, shot selection is dependent on the direction the player's body is facing.

To be an effective goal scorer, all the way up to the NHL, the two most important ingredients are accuracy (duh?) and the ability to get the shot off quickly.

Right there, you're hurting yourself by taking slap shots as a peewee. It's not a recipe for success.

Crosby, Ovechkin, Kane, Matthews, McDavid -- none of those guys utilize the shot with any frequency.

It died in the late 1980's when guys figured out that it was a low percentage shot.

Slapping at it with all your might and hoping to hit the net wasn't good enough anymore.

Nowadays, you don't have time for that wind-up before the opposition is all over you. And if the goalie knows it's coming, and can see it, they're going to stop it.

So, yeah, there are really just 3 shots worth taking and they're all based on the orientation of the shooter's feet and shoulders in relation to the net.

My opinion is that the snap shot is the most effective shot in ice hockey and the one every player should be taking with the most frequency.

Reason being -- every hockey player should be taking the puck to the net. Go to the net.

When you take the puck to the net, most often, you're facing the net -- toes pointed at it and chest facing it. 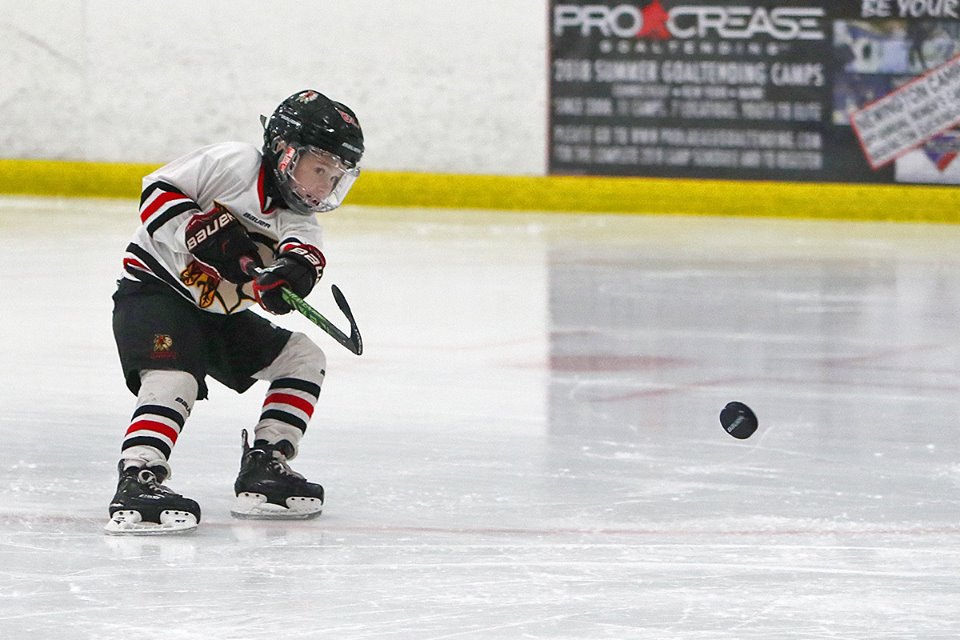 Duncan Rutsch following through on a quick snap shot.

There is no wind up -- you generate power by leaning over your stick and using your arms to transfer the force of your body weight into the puck. Boom -- it's off with a super fast release -- surprising the goaltender.

Remember, there isn't a wind up. You're not putting the puck behind you to really tee it up. You're not even getting your body into a postion to put a ton of power behind it -- the whole purpose is to get a shot off before the goalie thinks you're going to shoot.

You know that fancy stick you're constantly flexing in the locker room before games? Yeah, this is the shot where you should put all of that practice to use.

Duncan's second year squirt coach had the kids practice their snapshot over and over and over again. Most of the kids hated the awkwardness of shooting with both toes pointed forward -- and the lack of power they were able to generate using only their arms -- but it will serve them all well when they realize what she was trying to teach them.

A good snap shot is super effective from mites all the way up to the NHL.

Next type of shot is the wrist shot.

For most players, this is their go-to shot. It shouldn't be -- the snap shot should take it's place -- but it combines accuracy and velocity better than any other shot.

Unlike snapshots, wrist shots are taken when your skates and chest are facing the side boards. You can generate a lot more power in this stance because you're using your legs, transfering the weight from back to front, as you bring the shot across your body.

The downside to the wrister is that once your turn to the side, with the puck behind you, the goaltender knows what's about to happen. A shot is coming. The element of surprise is gone. 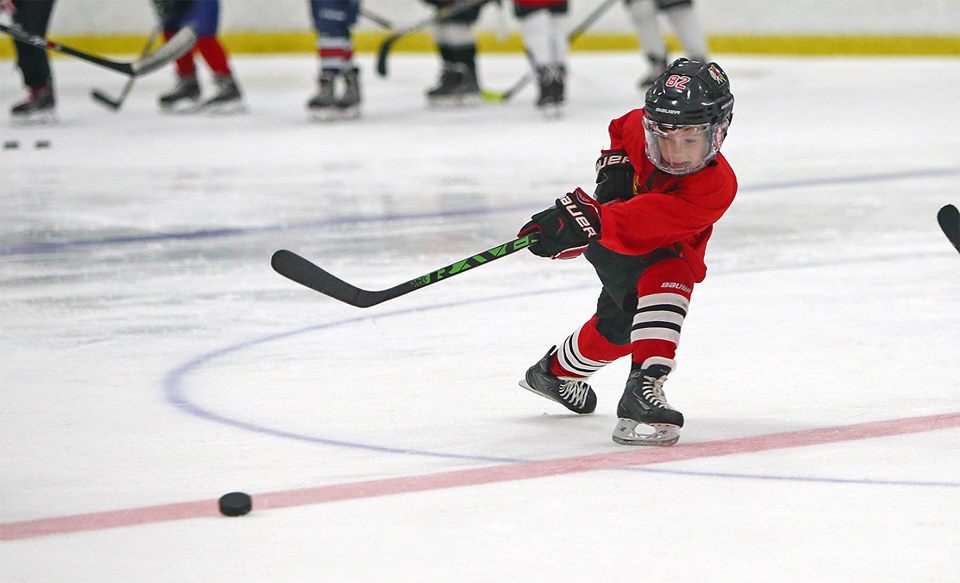 Duncan Rutsch wrists one towards the net during practice.

Up next is is the backhand shot.

Every team has that one kid with the nasty backhander. It's a thing of beauty how some kids have a knack for it.

For many hockey players, the backhand shot is the first type of shot that they're able to lift the puck with -- and so they roll with it more often than they should -- stickhandling into a position where the only viable option remaining is the backhand shot.

Really, though, a backhander is exactly the same as a wrist shot -- just with the opposite shoulder facing the net. You're not surprising the goaltender once you get into that pre-shot body position.

The downside, versus the traditional wrist shot, is that accuracy is out the window. Like, there's none.

Less than none if you sport a deep curve or open faced stick blade.

So, yeah, those are the three shot types good hockey players utilize most often -- and ideally, they should use the appropriate one based on where and how their body is positioned in relation to the goal.

Of course you can intentionally put yourself in position for whatever shot you favor -- like those kids that seemingly go backhand every time, but at a high level of hockey there's usually not time or space for that.

You just shoot when you have a good opportunity, and you select your shot based entirely on how your body is oriented. That's why, in my opinion, an effective snap shot should be the top priority.

So what's the deal with the slap shot?

Why is every kid raising their stick above their head on the backswing suddenly?

Part of the reason is cause it's been forbidden, until now. I imagine the body checking will be, briefly, out of control once that's allowed too.

But hockey players will always take slap shots cause they all think it's a hardest shot.

Sure, at the NHL Skills Competition each year, evey player in the hardest shot competition is taking slap shots. True, that.

But that's a controlled environment -- there isn't any defense. Or even a goalie.

In a real game scenario, they're much harder to pull as the game has gotten so much faster. Having the time and space to really pull a clap bomb from the point has kind of gone by the wayside. Players are so much more aggresive in the defensive zone than they used to be.

And, really, at the youth level, no 11 year old's shot from the point will have the velocity to "beat" the goaltender anyway. Actually, the wind up alone will give the opposition ample opportunity to close off the shooting lane...or even get out the way. Either way, the puck's not going in the net.

But that doesn't mean, as a player, your son or daughter shouldn't have the slap shot in their arsenal.

There's one scenario where it IS the ideal shot to take -- the one timer.

So beautiful when executed perfectly.

Sadly, kids whiff on them with regularity.

Cross ice passes in the offensive zone generate goals at every level of hockey because they get the goalie moving across the net. As a shooter on the end of a cross ice pass, it's basically a game of beat the goalie -- just get the puck on net faster than the goalie can get in position.

The shot doesn't need to be perfectly accurate since it's often directed towards a nearly wide open net, it just needs to get there. Fast.

The reason the slap shot works in this scenario is because there is no loss of time or space during the windup since the puck is still on its way.

If you can rip a hard one timer toward the near post, it will be very difficult for any goalie to get in position to stop the puck from going in.

The real challenge here, though, is the shot itself. It takes a lot of practice to get the timing and body positioning down.

It's no suprise that youth players miss the puck entirely. I mean, most mens league players struggle with it too. The timing and the weight transfer are really hard to master. You see NHL guys shank one-timers with regularity too proving that it's really hard.

Complicating things even more, at the youth level, the execution of a one timer is even more difficult due to the quality of the incoming pass. For the most part, kids' passes aren't exactly on the money.

So, yeah... One timer slap shots are great...but mastering the snap shot and having a super accurate wrister should come first.