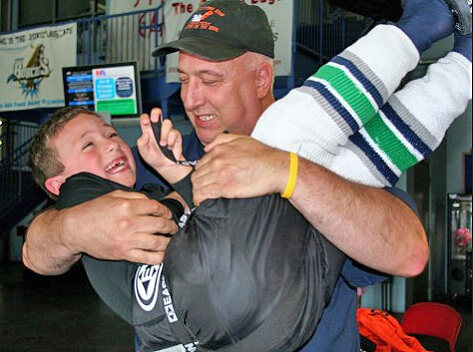 My oldest son Duncan took up a private coach following his second season of an in-house development program a couple of months before he turned 6 years old.

An adequate hockey player, he was ahead of many of his peers when it came to stick handling, shooting, passing, and skating backwards.

Skating forwards, though, well, he was in the middle of the pack with slow starts and a weak stride mostly to blame.

Skating, by far, was the weakest aspect of his game and something he really needed to work on.

The root of the problem was that no one had ever really taught him how to skate, like, the real way to skate by shifting all of your weight from one leg to the other.

Duncan's always been very coachable and focuses on the little things, almost to a fault.

Or, worse, when a right handed coach weaves around cones, Duncan will try to keep his stick on the same side the coach did even though he shoots left.

Going around a cones with the puck on your backhand side when it should be on the forehand isn't easy. Or correct.

In a large group, and nothing against the coaches or the clinics, there just isn't time to "show" each kid "how" to do it correctly.

So with that in mind, Duncan hooked up with Mike Kingston and Don Davidson from The Cutting Edge to unlearn what he'd taught himself over the past couple of seasons and start over, nice and slow, from scratch.

In a one-on-one scenario, after just 10 minutes of instruction, Coach Mike Kingston had Duncan using his left leg more, leading with his inside leg around cones *every* time, and using a glide to his advantage.

And Duncan knew it too -- excited for the next session the moment he stepped off of the ice.

While Duncan still has a lot to work on when it comes to his stride, for us, The Cutting Edge has been a home run.

A customized pace, lots of encouragement, and expert instruction... from someone who knows how to teach the game, hold a 5 year old's interest, and cleverly integrate fun so as not to make it like, well, what I'd imagine how piano lessons are often perceived.